Here's the latest involving Mr. Coltin, who was clearly set up and abused by the NH Justice system, said wrongs being continually validated by none other than former NH AG Kelly Ayotte.

(Well actually it disappeared, just as did one of my Kelly Ayotte blogs, click the link to see 404 error message. The full text is in the comments, however.

After reviewing a series of court documents, some dating back to the mid-1990s, The D.C. Writeup has concluded that Ayotte has neglected her duties at the expense of one of New Hampshire’s citizens.

Meet Dave Coltin, a Londonderry native, who was charged with stalking his ex-wife back in 1994. The charges were dismissed a few months later, but Coltin countersued, alleging that the town prosecutor had fabricated witness statements in his case.
But the court found no wrongdoing, and the town prosecutor got off scot-free. Perhaps the fact that the Londonderry Police Department refused to release, and eventually destroyed, the videotape evidence that Coltin says would have proved Hart’s guilt had something to do with that.

But Coltin pressed on in his dogged pursuit of justice. All the while, he was thwarted by New Hampshire’s notoriously corrupt justice system. A series of local and state attorneys refused to re-open his case, often resorting to muddled Orwellian legal reasoning to explain away their blood-stained decisions.

“Your suit of the County Attorney was frivolous, wasting court and county resources,” wrote Thomas Reid, the then-Deputy Rockingham County Attorney. “You simply have been unwilling to accept the answers you have been given. Your conduct has, at times, bordered on harassment.”

KingCast says well hell yeah, anytime you question the system -- even in the face of clear cut Injustice -- you are guilty of harassment, that's a given. I have scanned some of Mr. Coltin's documents and will share them later today, right here. Also I do not believe I received a response from Kelly on my RSA 91-A request regarding same.

As ABC News reports that the silly game goes on, and on, and on....

"Patric's face was traumatized. He had lots of bruising and lots of scratches and so on. He had a torn gum. He had debris in his nose, (a result of) being chased through the woods. Or having his face pushed into the ground," said Hamlet. Hamlet said victims of the cold die in curled up, fetal positions. He said their bodies are not stretched out like Patric's was.

"You can't get any stronger voices than these people. These are all independent people," said Terrance McCarthy, an attorney for the family who has been investigating the boy's death for nearly six years.

Patric's family said their frustration is at a boiling point because New Hampshire authorities have consistently refused to reopen the case.

"This isn't just a statistic. This is my son. He's my little boy and he needs to be vindicated. He needs justice," said Dee Murray, Patric's mother.

Thursday morning the family has planned to travel to Concord, N.H., where they will ask the U.S. Attorney's office to join the investigation. O'Connell said he believes they have jurisdiction because Patric's body was found in the White Mountain National Forest.
Posted by Christopher King at 5:01 AM No comments:

So the guy alleges that Kelly violated his procedural/substantive Due Process Rights. That's no surprise, seeing as she was found in violation of court rules in her case against me (1, 2) which was of course.... DISMISSED.
************
From the Union Misleader:

A Concord developer's $55 million lawsuit against state and Concord officials has been referred to Maine after all four of New Hampshire's federal district judges recused themselves from the case.

The judges offered no explanation for backing away from developer Kevin Guay's suit. Guay is suing the city of Concord, plus several high-ranking state officials, for tearing up two of his properties while searching for illegal pollution earlier this year.

Guay was not looking to have the case heard in Maine, but he says he doesn't mind the change, noting, "There's a lot of high power that I'm going after.

"I'm actually more comfortable that it's in Maine," Guay said yesterday. "I don't think people would be as prejudiced because they're not as aware of what went on."

PS: David Coltin you are next. Got your docs scanned in the other day.
Posted by Christopher King at 7:23 AM No comments:

Davey Kenney and KingCast explain why Ayotte, Lynch fail to punish rogue cops and dishonor the will of the people.

"Without clean and credible cops, the entire justice system is in danger of collapse."

Well I would have written police officers instead of cops, but that's neither here nor there. What is here AND there is the fact that Chris King's First Amendment Page has thoroughly documented the failings of the State's highest duo to make any substantive moves to address crucial Civil Rights and Police abuse issues. See the letter below from Ralph Holder, yes he is a cousin of U.S. Attorney General Eric Holder.

At any rate, that Globe Editorial is a scathing indictment of a "Justice" system that too often insulates and protects bad Law Enforcement Officers like Norman Bruce McKay, whom Liko Kenney shot out of fear and self-defense before he was likely murdered by multiple felon (and currently incarcerated) Gregory W. Floyd, another of Kelly Ayotte's "heroes."

Interesting that Kelly Ayotte resigns just as more lawsuits emerge against her and as her office finally releases the investigative materials in the bizarre Concord Credit Union cop-on-cop shooting. I call them cops because they were probably acting like meatheads on steroids, hah. Anyway, Kelly Ayotte is kind of like Sarah Palin, so let's just call them "Payotte" going forward.

Lastly, Governor Lynch doesn't really ride a motorcycle, doesn't inhale and doesn't follow the will of the people as expressed through the New Hampshire House and Senate, in favor of passage of medical marijuna.

It's a sad state of affairs for folks in the Granite State.

I sent this to the Union Leader and Eagle Tribune

Letter to the Editor

Citizens of the State of New Hampshire should not be fooled by the sudden resignation of Attorney General Kelly Ayotte. Her departure has far less to do with a potential run for political office than it does with her ignorance and incompetence in her role and responsibility as the state’s top law enforcement officer. The Attorney General has a legal, moral, and constitutional obligation to protect the citizens of New Hampshire against abuses of their rights by any of the 3 separate branches of government under the constitutional principles of checks and balances. Ayotte failed to comprehend or was ignorant about her role in carrying out the duties of Attorney General which has allowed bias, discrimination and other forms of civil and constitutional rights abuses by state government officials to go unchecked. She placed the onus directly on the backs and pockets of citizen to seek vindication of their rights through a federal court even when was clear evidence of criminal or civil violations of the law by state officials. Request her civil rights record and you will find she has done nothing to curb the civil and constitutional rights violations or abuses by law enforcement, court, or any other public official during her tenure.

It is my firm belief that It would be a serious mistake for the citizens of New Hampshire to send her to Washington or allow her to hold any appointed or elected political office when she failed to carry out her primary duty, responsibility, and role of protecting us against civil and constitutional rights violations by government officials. Putting criminals behind bars is relatively easy, but taking on social injustice issues of racial politics, judicial bias, institutional racism or other discriminatory acts by public officials is also part of the responsibility of Attorney General. The failure to act has really proven to be Ayotte’s undoing. She failed the citizens of New Hampshire. I wouldn’t vote for her if she volunteered to be a dogcatcher, let alone pay and her send her to Washington as our Senator.

"Nowhere is there any explanation of how any case, without detailed forensics, can be so decisively brought to ground and then covered up while so much evidence begs to be researched. The interviews which would have allowed a more complete and improved understanding of important elements of this case were never undertaken.
In this mind-boggling coverup of facts, the real murderer was allowed to freely roam the streets in this community, breaking the law and threatening lives as a media-proclaimed hero began to think of himself as bulletproof."

- Bradford Whipple, Sugar Hill, NH
Posted by Christopher King at 8:47 AM No comments:

We have established Kelly Ayotte's ongoing/legacy in general and her deviations from protocol in specific, when it comes to the Franconia shooting tragedy "investigation" involving Liko Kenney, Bruce McKay and Kelly's "hero" and multiple felon (and currently incarcerated) Gregory W. Floyd.

You see, with Kelly, its not that she is sued often and is in the middle of several lawsuits right now that reflect poorly on her reputation. Every AG gets sued, duh. But it is the tenor of the lawsuits against her and her stupid actions (most notably the Planned Parenthood and same sex marriage snafus) that really identify her as a feckless right wing zealot.

This weekend I will return to Dave Coltin's case against Kelly, and of course I look forward to reading Casey Sherman's book in late summer/early fall, "Bad Blood: Freedom and Death in the White Mountains." I'm headed up to ride bikes up there with Davey Kenney this weekend, prolly hit a little tennis and whatnot.

PS: That "legacy" link contained a step-by-step guide to Kelly Ayotte's missteps in Office as NH Attorney General, including a multitude of Right-to-Know violations. However, in addition to my entire blog about Kelly Ayotte disappearing (my investigation show was infected with malware somehow, huh) so too has that post. I'll have to check my emails and see if it somehow disappeared from there as well.

PPS: At least they haven't taken the postings about the juvenile DNA reporting constitutional violations.

PPPS: Now her likely opponent Paul Hodes didn't do much in the Franconia matter either, but according to our mutual mechanic, at least he used to drive a silver BMW 535is just like one of my BMWs. The one with the "CIVL RTS" license tags, as opposed to Bruce McKay's "GOTCHA" tags. The Ninja 650R tag, well you don't need to know what it says :) 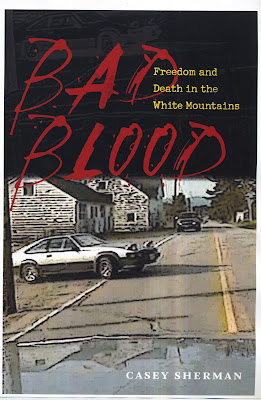