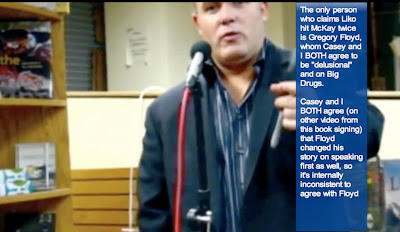 The only person who claims Liko hit McKay twice is Gregory Floyd, whom Casey and I BOTH agree to be "delusional" and on Big Drugs.

Casey and I BOTH agree (on other video from this book signing) that Floyd changed his story on speaking first as well, so it's internally inconsistent to agree with Floyd.....

There's no sense hiding our disagreement, and I am thoroughly confident in my position, given the facts to which we both agree on, and Gregory Floyd's deportment and stream of lies throughout the proceedings, including inter alia:
a) His criminal son's age.
b) His "involvement" in Vietnam, he was a waterboy at Camp Lejeune. Which is funny because he never was sharpshooter in Vietnam, but guess what, my Uncle Joe (RIP) sure as hell was. And man, that guy could shoot. Unbelievable.

It all goes right back to the Windshield Bullet that Floyd fired before he spoke to Liko Kenney. Kelly Ayotte hid most of these lies, but I exposed her for so doing in the Vietnam link. Now Kelly Ayotte is in deep doo-doo for her mishandling (read: malfeasance) in the FRM ponzi scam rug sweep. I knew Kelly Ayotte was a deplorable public officer a long time ago, despite musings to the contrary from various Internet trolls.

http://christopher-king.blogspot.com/2010/05/kingcast-brad-whipple-and-casey-sherman.html
Posted by Christopher King at 6:13 AM