KingCast reminds Rich McLeod and Carl Belz: The Jig really is up. 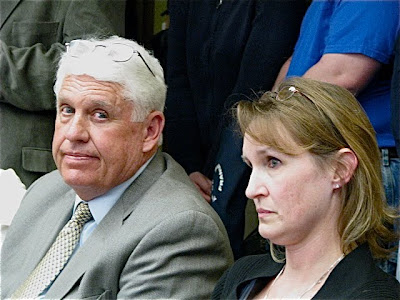 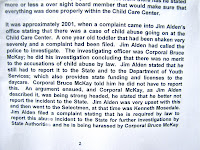 Oh, yah, just as I said in the now-famous Issac Hayes post. I can't wait to see how soon-to-be former Selectman McLeod responds to the pending recall petition and how he and Selectman Carl Belz respond to the discovery requests in Liko Kenney v. Franconia et al. See that's gonna' be a hoot between all the published statements that contradict not only themselves but the Real Facts, some of which are right here in the Mark Montminy post.

Bruce McKay actually tried to illegally shut down a complaint of child abuse. That's likely a chargeable offense in and of itself, goes to negligent retention and supervision, duh. I told you in Bowfinger or Bad Blood 1 and 2 (para 4) that Bruce McKay was not "by the book" but was rather "by the seat of his pants," Officer Pepper John Wayne wannabe. It's all going to come out, and it's going to come out right here bubba. The interview with Carl Belz is just other-Worldly but that will definitely not be published until after the town responds to Discovery. Whew. What a motherlode of information, some of which even I was unaware. Okay, well I will say this much because it has already been discussed, but as Ryan Hartford told me in this interview about another botched and dismissed Bruce McKay case the first time I met him, Bruce McKay was out of Jurisdiction at Profile School when he sent that innocent girl to the hospital with his OC Spray, and Carl Belz said as much. As a recent retiree he can and should be a valuable ally in the quest for Truth and Open Government going forward. I know he feels bad about the past but we can't fix that, we can only be honest about what everyone knew and should have known.

Yah, as I say the Investigative files have most of the Real Deal, and while I'm not going to be too specific about that, the family and the Free World look forward to comparing what the government says this time with Reality, in a Court of Law. And remember, at least one professional review the file and found liability all over the place. They won't be the last to say that when it's all said and done.

KingCast: Reel news for real people.
Posted by Christopher King at 7:26 AM