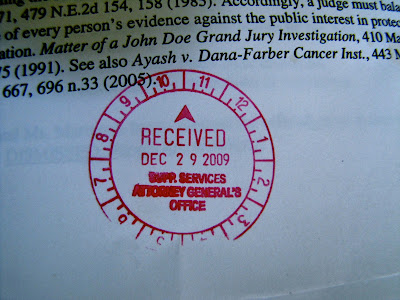 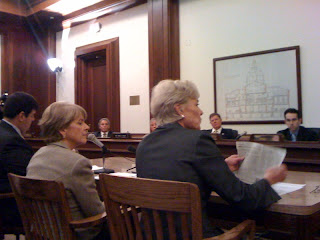 Dear Attorney Coakley:
We last met in October, 2009 as we were both preparing to testify before the Senate Subcommittee and I snapped your picture with my iPhone. You promised me that you would investigate Mayor Menino's missing emails and you did, finding no criminality on the part of Mr. Kineavy or anyone in the administration. I've got video of His Honor discussing that at a recent motorcycle/scooter event.

But in this case you have apparently not taken any action despite the fact that there is clear cut criminality and/or government malfeasance Everybody at Beat the Press knows it. See Globe Newspaper Co. v. District Attorney for Middle Dist., 439 Mass. 374, 788 NE2d 513 (2003) read para. 5. But Jessica Van Sack may indeed find herself in the exact same situation that Toni Locy was in, facing contempt of court charges in that $5.8M Settlement in Hatfill v. NYTimes, infra, for failing to name confidential sources BECAUSE OF THE ILLEGALITY INVOLVED.

In fact, the violation was so obvious, and with Marybeth Heffernan so focused on meeting with Ms. Marinova.... (again, Heffernan wrote on 29 April 2009): "Hi, I apologize for not responding sooner. Absolutely, I would be more than happy to receive any information regarding the DOC that you feel would be helpful...."
.........I was prompted to write on 4 January, 2010 that you and your boss, Governor Patrick -- were indeed "poised to take swift action."

But before I wrote that blog entry I hand delivered the complaint and request for information seen above on 29 December, 2009 and I have not heard back from you.

Since that time I have seen you take action on the missing emails, as noted. Meanwhile I've been busy with the Mayor's Office and other offices in City Hall getting downtown parking for motorcycles and scooters, and getting my neighborhood cleaned up. Meanwhile this blog has helped put Joanna Marinova in touch with seasoned Defamation/First Amendment counsel who are suing the Boston Herald and Channel 7 for Defamation. The information that was unlawfully leaked provided the foundation for the offending conduct from the two Defendants.

But the CORI issue is still sitting there in a black abyss. Your boss told me in the video below that he was going to take care of this thing, i.e. "put it to bed."watch him in this KingCast video.

Has Governor Patrick given you any instruction on it? He told me in video he was going to conduct a thorough investigation. Do you care about this situation? Do you have any documents proving that your office has lifted a pen, pencil or keyboard in an effort to address the clear cut criminality involved in this? Please provide a copy of any and all documents that prove your office has undertaken any investigation into this CORI violation and attendant Defamation issue.

It's no secret that I question you and your Republican buddy to the North, Kelly Ayotte. After all, you both have made up some fantastic stories or issued coverups about men with knives.

I'm certain you will assuage my concerns with a series of documents demonstrating your concern and Due Diligence on this matter.

Posted by Christopher King at 2:55 PM