Who's raping whom with Fraud upon the Court? KingCast proves Dan Mullen a scheming liar just like his client, fired Jaffrey Chief Martin J. Dunn. 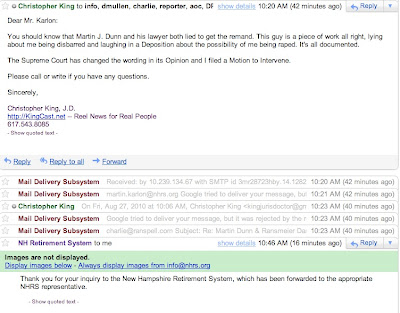 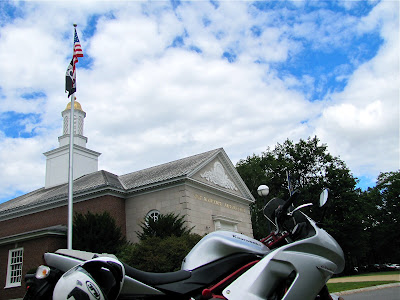 As noted in this post with the Motion to Intervene, the NH Supreme Court reversed Martin Dunn's lies about me being "disbarred" as manifest by and through his counsel, Dan Mullen. I wrote a Supplemental Pleading that I will post later, and it showcases the indisputable FACT that Dan Mullen, of Ransmeier Spellman et al., knew I was suspended and said as much before the Retirement Board where he lost his case, but only juiced up the pleadings to say "disbarred" in an attempt to gain Certiori before the Supremes.

His Fraudulent activity worked, he got Cert and a reversal for his bubble-head client.

But meanwhile, Dipshitz Dunn (as correctly heralded by his peers) and Mullen actually had the nerve to claim that my Demand Letter about the police abuse suffered by Willie Toney was "fraudulent" but he and his client knew better. They knew that the only NAACP Officer Affidavit thoroughly supported my position, that I lied about NOTHING and told the NAACP brass EVERYTHING. Read it here.

Which brings me to my Second Supplemental Motion to Intervene:

EXCERPT: May it please the Court: ........Attorney Dan Mullen wrote

"[King] wrote bogus news articles fantasizing that Mr. Dunn has been arrested for raping his daughter."

Query, did Dunn tell him that? Did Mullen believe him? Did he engage in Due Diligence to check the blog or to ask for a printout (that does NOT exist because it never happened)..... This is pure poppycock, and Dan Mullen and his client knew -- by virtue of the very same Internet posts that they loathe -- that I never issued any fantasy comments about Dunn raping his daughter. No, in point of fact that sad truth was that Dunn was having fantasies about me being gang-raped in prison, read the letter that he thought was funny ("you 'bout to be Bubba's bitch you coconut head racist") and the attendant transcript above. Just the FACTS.

Meanwhile Dunn whines that I called him a "white cracker" well ain't THAT the pot calling the kettle black.

But what's worse than that is the fact that his lawyer jumped in bed with him and worked the lie too, making him no better than his client, some might say even worse because of his moral and ethical obligations to the Court. Now that's one ugly two-headed beast, that.

Lastly Dunn continued to lie about me and told Charlie Duffy in this March, 2006 email that American Tower Corporation had to have police escorts to fire me; walk me out of the building. More poppycock. There were no escorts, just a pissed-off company who had to pay $290K to the Department of Labor after I ratted them out for not paying my trainees overtime, and that's another FACT, call Attorney Corey Surett, he remembers me, or simply read the DOL press release.

.......Let this be a lesson to fired Chief Martin J. Dunn, Dan Mullen and to other blue blood attorneys at Big Firms: Do not assume you can lie at will and get away with it, because sometimes you will get caught, and sometimes you will be punished, one way or another. The types of lies and even physical abuse I suffered at the hands of some of these lawyers in the 90’s (read: Luis Alcalde, Esq) will not be tolerated anymore. We are in a New Era of Communications with the Internet, and viva la difference.
Posted by Christopher King at 6:10 AM