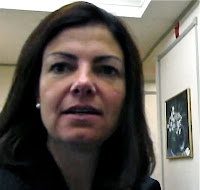 As you can see in the top video, and in this video from a Facebook-advertised open rally, Kelly Ayotte and Karen Thoman are complete tools who hate the First Amendment.

As you can see in this video from the Nashua, NH GOP rally, Kelly Ayotte and racist Maricopa County Arizona Sheriff Joe Arpaio had nothing to say when I reminded them that Kelly Ayotte flip-flopped on her As I noted in this post, Conservative political writer Debbie Schlussel warned 2 years ago "Don't vote for Kelly Ayotte."


Ayotte also instructed New Hampshire police chiefs not to use the trespassing laws to take undocumented workers off the street. Remember Ayotte’s wimpishness in any of her future runs for office.

Ayotte is now presenting herself as a conservative and tea party style candidate. That’s baloney. She’s a career politician who did the wrong things while in office. Don’t give her a chance to repeat those wrong things in the U.S. Senate.

But like the paid GOP toady she is, she flip-flopped and now basically supports similar activities and a reign of terror imposed by Arpaio, who has paid $40,000 to American Citizen Nick Babcock for four (4) wrongful arrests occasioned because he works for Arpaio opponent Dan Saban, also suspiciously arrested on a prior election eve. Given Ayotte's history with me as NAACP Legal Chair (she and her buddy, fired Jaffrey Police Chief Martin Dunn lost trying to jail me for writing a Civil Rights Demand Letter), Kelly Ayotte probably supports these unlawful arrests as well, anything to get in office and abuse power.

Note to anyone who supports Kelly Ayotte: You're voting for an idiot GOP sockpuppet who will flim-flam and flip-flop her way into any office she can find, even violating her own promise to finish her term as NH AG, where she had a horrible record on Civil Rights and big business, as documented.

Related: The Nefarious relationship between Kelly Ayotte and Joe Arpaio.
Posted by Christopher King at 10:08 AM