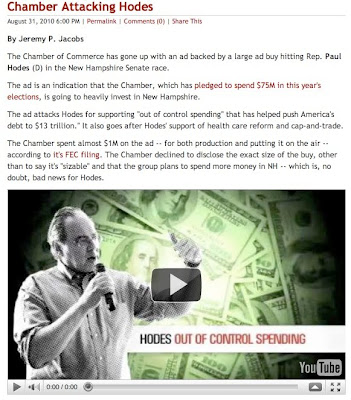 This is because New Hampshire has become, or is, a Right Wing Fascist State. Not the general populous but the Powers that be. The Chamber is all part of it (just like the movie, remember that one?).

The Chamber should be more concerned about Kelly Ayotte's obdurate stance against Civil Rights, including Unconstitutional DNA testing of NH Youth, a loss of $110M in the Tuttle/JUA insurance cases (08-E-148 & 08-E-151), an unbelievably stupid vote against same-sex marriage she had to retract, and her loss to Planned Parenthood in which attorney fees were assessed against her.

It's all right here where Governor Lynch blames her for a $140M budget deficit in the "Checkered Past" link:

Moreover, look at how Kelly Ayotte threatens arrest against a reporter seeking information about a sham investigation into a double homicide, caught on video:

Here is your back story:

“Bad Blood: Freedom and Death in the White Mountains” is a book and pending screenplay by Boston area writer Casey Sherman, whose Aunt was the last Boston Strangler victim. Sherman basically proved that the guy they fingered and convicted DiSalvo, IIRC didn’t do it.

Flash forward to this case, in which Kelly Ayotte closed an investigation in 24 HOURS into the possible murder of a young man who shot a bully cop. He was such a bad cop that the town and NH Legislature refused to name any section of a roadway after him, an unheralded move in the SB 154 hearings.

As a former Assistant Attorney General myself I am not anti-cop nor is former Franconia and Sugar Hill LE Bradford Whipple, who appears in the video, but he told the town to fire Bruce McKay 5 years before the tragedy happened. Don't believe me shoot him an email, he's cc'd here.......Watch video here:

Point being that Ayotte is a shill for abusive law enforcement, and as noted in the video, she is a big business dupe and she is horrible on Right-to-Know.

Everything we do not need, or want, as a U.S. Senator.

Related:
Kelly Ayotte threatens journalist with arrest at public party.
Kelly Ayotte Unfavorable Ratings on the rise in NH.
Posted by Christopher King at 4:39 AM