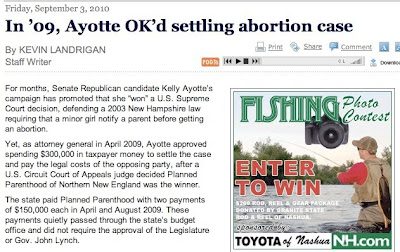 Cross Post: Firedoglake
KingCast newsflash: Hey Kelly Ayotte, you hater of open and honest government, any time you are ORDERED to pay your opponent's Court Costs, you have not "won" a damn thing.

For months, Senate Republican candidate Kelly Ayotte’s campaign has promoted that she “won” a U.S. Supreme Court decision, defending a 2003 New Hampshire law requiring that a minor girl notify a parent before getting an abortion.
Yet, as attorney general in April 2009, Ayotte approved spending $300,000 in taxpayer money to settle the case and pay the legal costs of the opposing party, after a U.S. Circuit Court of Appeals judge decided Planned Parenthood of Northern New England was the winner.

Right on Kevin, we need large scale reporters like you to tell the Truth, I have been noting that for a while now about Kelly on the Planned Parenthood case. That's why she refused to speak to me at her little rally last weekend, but you can hear me try to ask her on video, click the blog link for links to all (or at least many) of her failed policies.

PS: I have filed an RSA 91-A request to AG Michael Delaney on this:

Ovide Lamontagne knows what's up, that's why he went to Franconia to discover the Truth about what his Constituents will want. Courtesy M deRham photography.

Posted by Christopher King at 10:13 AM