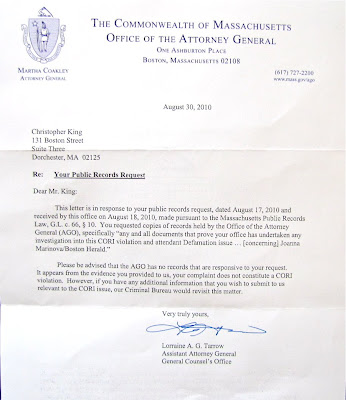 Soooooo......I just received a nonsensical letter from Mass AG Martha Coakley’s office in response to my request for any and all documents evincing any investigation into an unauthorized CORI leak, relative to Marinova v. Boston Herald, Jessica Van Sack and Channel 7. A fun video of my follow-up visit, a copy of the letter itself:

“There are no documents responsive to your request…. (also) It appears from the evidence you provided to us, your complaint does not constitute a CORI violation."

Here's the underlying CORI/Defamation case where the Herald and Channel 7 said Joanna Marinova had sex with an inmate in discussion on Beat the Press. The information leaked about Darrell Jones is clearly not of a public nature, much less does it indicate that he and Ms. Marinova had sex while they were working on Prison reform with State Rep. Gloria Fox, for Crissakes...... And here is Joanna Marinova at the Mattapan Public Library screening her award-winning PressPass TV videos, "Voices Behind the Wall" and "Mr. President," made in conjunction with noted prison reformer and wrongly-convicted inmate Darrell Jones. Video at bottom.

Second, The problem is, she would be wrong there, very wrong per Globe v. District Attorney for the Middle District, 439 Mass. 374 (2003). The Holding reads in pertinent part:

"We therefore conclude that the wording of the declaratory judgment must be modified to limit it to those record requests that are framed entirely in terms of information that would be available from court or other public records, as only those requests call for disclosures that are entirely exempt from the CORI statute. The case is remanded to the Superior Court for modification. The declaration should be amended to read as follows: "Docket numbers of criminal cases prosecuted in public judicial proceedings, correlated with information that is also available from court or other public records, but not correlated with defendant-specific information, are public records under G. L. c. 4, s. 7, Twenty- sixth, subject to mandatory disclosure under G. L. c. 66, s. 10, and their disclosure is not prohibited by the CORI statute, G. L. c. 6, s.s. 167 et seq."

Her boss, Deval Patrick, twice publicly stated to me, at his Town Hall meeting and during an impromptu Juneteenth meeting that his administration was going to "conduct a thorough investigation" to "get to the bottom of this" (Town Hall) and that he would "put it to bed" (Juneteenth).

Attorney Coakley, obviously he disagrees with you, but if the investigation is closed please produce a copy of any and all documents you have in your possession. If you produce nothing I will assume the investigation

a) is open, proving you wrong, ipso facto.
b) never occurred.

Name your poison.
**************
Do we have another hypocritical and feckless AG like New Hampshire’s Kelly Ayotte? The two of them certainly like to tell lies about men with knives. And Coakley ran for Senate, losing a seat that was all but handed to her while Kelly looks a bit stronger in her race, mostly because she keeps the Truth about her background from the General Public, even resorting to threatening Yours Truly with arrest for asking a few simple questions about Boston writer Casey Sherman’s book and upcoming movie “Bad Blood: Freedom and Death in the White Mountains” at a public event. Watch the video.

It sure looks that way, despite her recent press release in which she claims to be the New Messiah of Civil Rights. Where was she during the Jason Vassell case while he was getting run over by racist prosecution, with Bad Cop Lieutenant Thrasher falsely proclaiming that Mr. Vassell was a drug dealer, and a racist prosecutor Michael A. Cahillane claiming that Mr. Vassell – a community volunteer and great student without ANY criminal record – was a “menace to society.” No, Ma'am, Prosecutor Cahillane is a "menace to society" and so are you for granting government imprimatur. Watch the KingCast Jason Vassell short film.

Where was she on the Cat Gibbons case, where her Division of Banks erroneously and selectively targeted one of the State’s only black female mortgage brokers for doing Stated Income Deals, even though none of her Deals resulted in foreclosure and she put no one in Harm’s Way. Good Thing that KingCast cameras came out, and the KingCast network of attorneys got involved and Ms. Gibbons will be able to apply for her Loan Originator’s License immediately, and her Broker’s license in a few months, rather than the permanent revocation that the DOB explicitly stated it was seekin on the record -- and in KingCast video.

But there’s more: She empirically allows her favored violators to continue doing business in Massachusetts with a slap on the wrist an a few fat fines. Query, where does that money go? Does any of it reach the people in the communities that were adversely affected by the white collar crime and deceit?

WHEREFORE, it is time for another public records request per MGL 66 § 10.
.
Dear Attorney Coakely:
A) Please provide documents showing the investigation to be closed.
B) Also provide documents that show the total amount of fines assessed against any and all real estate companies engaged in providing mortgages for the years 2006, 2007, 2008, and 2009.
C) Further provide documents that show how these monies were applied to the State Budget, and what departments and agencies received funds from these fines.
D) And while you're at it, please provide an accounting of all monies derived from motorcycle registrations by Massachusetts General Law (MGL) Chapter 90 Section 34 for each of the calendar years 2000 through 2010, inclusive to date. As you are a skilled and professional attorney I'm certain you will have advised your boss and client, Governor Patrick, to take care of this.

Posted by Christopher King at 10:13 AM