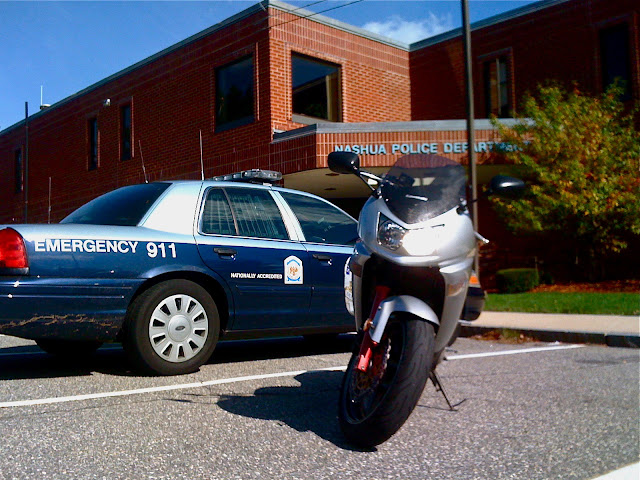 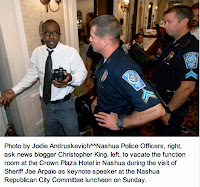 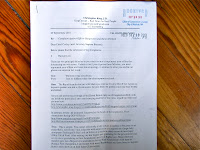 It was my pleasure to meet the both of you and to pick at these thorny issues and the shame of the Mattapan murders. We both understand that the bulk of your efforts at the PD will be with respect to the conduct of Karen Thoman, while Attorney Bennett addresses the press and open event matters noted in my Complaint.

I hate to have to be so forward, but note that Kelly Ayotte did nothing (p.2) in 206/2007 when I wrote her about the Unconstitutional School Board Policies here in Nashua, I had to take it on myself with Alderman Teeboom, Sandra Ziehm and others joining.

Your prime videos documenting the oppression are right here,with GOP Hitler Youth "Ryan" doing a number on me with Officer Hargreaves, none of them would listen to a damn thing I had to say, caught it on video.  And yes I have maintained all raw footage files to show the full continuity of the exchanges. I am fully confident that my behavior is on point and professional, as it was before the Nashua School Board three (3) years ago, as opposed to the behaviors exhibited by Kelly Ayotte and local GOP Office members Karen Thoman and Dan Richardson.

Newbies: This morning's entry contains the Complaint and related video and hateful comments from the GOP Treasurer. His air of privileged insouciance hits at the core of everything wrong with the GOP and paints Nashua with a patina of country-bumpkin essence.

"Do you think it was racial?" asked one of the Sergeants, I'm not saying which one.
"Well I think it's a combination of things, and race is a part of it, so is viewpoint-based discrimination. Plus I'm not as young as I look, and some people assume I haven't seen this stuff before. And I'm like, look man I'm 45 years old and I don't have time for this crap...."
"You think he would have treated you differently if you were, say FOX News or something...."
"Undoubtedly."

The problem is that I bring too much color to the game, in general, and they certainly don't like it. But that's too bad because it's not about to stop.

KingCast.net -- Reel News for Real People.
PS: It just occurred to me, this is the third time in our history that Kelly Ayotte has tried to have me arrested, dammit. And people have the nerve to call ME a racist, or to have a vendetta, ahem. We see who's got the vendetta, because she's got nothing of substance to say to me or to Casey Sherman.Speaking of Color, enjoy today's KingCast jam:

Posted by Christopher King at 10:23 AM