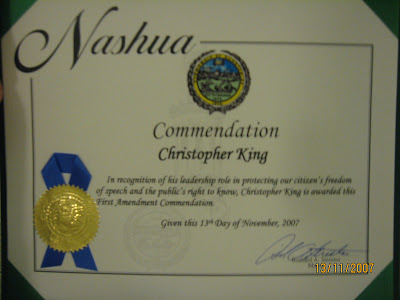 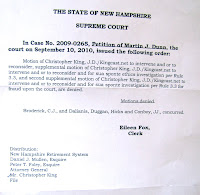 1. The New Hampshire Supreme Court allowed a Bad Cop named Martin J. Dunn, and his establishment lawyer Dan Mullen (former Kelly Ayotte waterboy) to repeatedly lie about me to the Court and get away with it. Specifically , they lied and said I was "disbarred," they lied and said that I "misrepresented [myself] as being licensed in New Hampshire," they lied and said I wrote a "Fraudulent letter" from the NAACP (see NAACP Veteran's Chair Cleaven Ferguson's Affidavit) and they lied about me saying that Dunn raped his daughter. In reality it was Meshugana Marty laughing at a racist hate mail to me that said

"You better save your food stamps you goin' need protection where you're going, you bout to be Bubba's bitch."

All of these matters invoke Rule 3.3 Candor to the Tribunal concerns, and they besmirch the Court and legal community, but as two duly licensed area attorneys (and I mean partners in well-respected law firms) noted to me "King, don't you know you're messing with good white people, and you are a black man in New Hamsphire without the kind of power or money to do that. They hate you." And that's purely evident that they do not care about Justice, Truth or Accuracy.

2. The GOP attacked me at the Jeff Arpaio rally and there is no question but that if I had struck one of their cameras the same way that I was struck, I would have been arrested, pronto, never mind that Mayor Streeter gave me a Mayoral Commendation for all of my diligent First Amendment work. The cop stood right there and criticized me instead of admonishing this white woman who lost her cool and broke the law, smiling with glee the whole time, the video doesn't lie, folks. I telephoned Police Chief Conley this morning and he never returned my call, so I will go see him in person tomorrow and file my complaint.
Posted by Christopher King at 8:09 PM