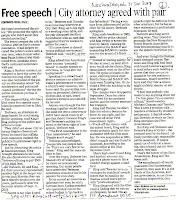 HaHa, what a pipsqueek!  Now he is threatening the police chief.

You can call me whatever you want to call me, but I was right the first time when idiots like you said the same thing, and it's not a threat, it's a simple request for a legal opinion, which is my right to request, the last time I checked.

Are you aware of any law to the contrary, you stupid jackass?

Cross Post: Phoenix New Times/Liz Hourican attacked by McCain LE; Firedoglake.
Even though I have a history in professional journalism prior to law school and blogging, I start with this excellent 2006 blog entry from Liberty and Culture as I address U.S. Senate hopeful Kelly Ayotte and the GOP's repeated threats to arrest me:

***********
"With the advent of radio and television, particularly the days where networks dominated, the professional writer was separated from the man in the street. With the rise of the Internet the writer-citizen has re-established a healthy balance not seen since great days when our republic was founded. Perhaps two hundred years from now, some graduate student will be writing a dissertation on The Role of Blogs on the Restoration of the Principles of the American Revolution"
The letter also appears at the bottom of this post, and it speaks for itself. I am obviously a photojournalist of reasonable skills and I'm a capable Internet short film maker. There is no dispute about that, and Sunday's coverage of the Deval Patrick/Dems vs. GOP short film, above, showcasing the Democratic openness v. the GOP fascism clearly demonstrates as much.
But hither the ACLU? Well they were quite helpful when I posted up as Boston Bob (Harvard Citizen Media Blog), and they got busy writing Supreme Court pleadings in Massachusetts, see Case No. 2009 SJ165. I spoke with Boston ACLU last week and I know they contacted NH ACLU...

Posted by Christopher King at 7:47 PM