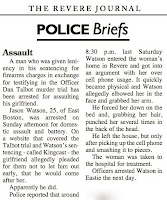 Perhaps you're too busy writing Deals with the Devils (i.e. Derek Lodie + Jason "Batman" Watson) to respond to my inquiry about the toxicology results on Revere's Finest, but let me pull your coat tail to something:

Jason Watson, incorrectly hailed as some kind of altruist by Federal Judge Joseph Tauro pursuant to your Devil Deal-Cutting, was arrested yet again on another Domestic Violence accusation. You should know that I'm chill with the S.D., mother Mr. Watson's child, and she has extended her Restraining Order against him as well. Seems he threatened to blow her father's face off, etc. etc. Flash forward:

“He allegedly elbowed her in the face and grabbed her arm. He forced her down on the bed and grabbing her hair, punched her several times in the back of the head. He left the house, but only after picking up the cell phone and smashing it to pieces. The woman was taken to the hospital for treatment.
Officers arrested Watson in Eastie the next day.”

Look Bro: I'm going to tell you straight out man, and don't get upset or put a finger in my face:

You are going to screw around and some innocent woman is going to be disfigured or killed by this guy, and that blood will be on your hands, the same way the blood of Mr. "Knife-to-labia" Corporal Bruce McKay is on the hands of Kelly Ayotte, Chief Montminy and the Franconia Selectmen, Hollywood movie forthcoming. McKay's wife Angela filed for protection on him, too, not that Kelly cares. As a former AAG I will tell you that you do Law Enforcement no favors when you cut deals with the Devil. All you do is foster the belief that LE have misogynist tendencies toward women, and that in turn stains the reputation of good men in blue, are we clear? Good. Just trying to fix your myopia before it turns terminal for some poor woman. Quote:

He is giving back to society - by punching life in the face, one female at a time...

That having been said, where is the response to my cocaine conundrum, or do I have to sue you for it?

Very Truly Yours,
The KingCaster.
cc: Judge Tauro, by 1p today.
Posted by Christopher King at 7:04 AM