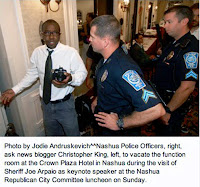 For you lawyers: Can you say, "Pattern and Practice?"

I blogged about Amy Goodman's situation involving the 2008 RNC beat down and 800 arrests in this post. Here is the Truthout 9 May, 2010 feature on the lawsuit, filed by the Center for Constitutional Rights.

I mentioned it at 8:30 of the KingCast movie (above) showcasing several forms of viewpoint and content-based abuse leveled at me during the GOP Joe Arpaio love fest in Nashua, NH one week ago to the Day. Now let's see if GOP Secretary and Committee Chair Karen Thoman grants my requested apology for whacking my camera with her GOP flyer at an even that most certainly was NOT private, as anyone could buy a ticket and other media were there.

Anyway, King's video is entertaining mainly because of what happens to him: A GOP hausfrau whacks his camera with a pamphlet; some Republican crone orders him out of the building; and the local cops force him to amscray under threat of arrest, even though he's credentialed and there are plenty of other media types there. The video's a tad long at 12 minutes-plus, but worth every second.

Not to mention the fact that Kelly Ayotte threatened to arrest me 2 weeks prior at a public event advertised on Facebook no less, watch the video.

And I am talking about moving for Injunctive relief with some well-respected local First Amendment Counsel as well. And the compelling thing is, I need immediate relief because the fall elections -- in particular the U.S. Senate 2010 race -- loom large. In contrast, the relief sought against the RNC is temporally stale by comparison, though no less significant of course.

The Center for Constitutional Rights is dedicated to advancing and protecting the rights guaranteed by the United States Constitution and the Universal Declaration of Human Rights. Founded in 1966 by attorneys who represented civil rights movements in the South, CCR is a non-profit legal and educational organization committed to the creative use of law as a positive force for social change.