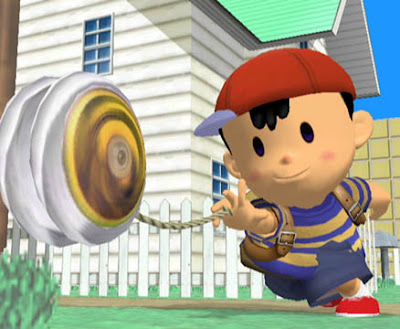 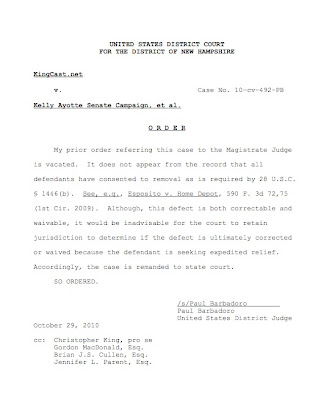 In a move likely calculated to protect my interests, Federal Judge Paul Barbadoro Remanded KingCast v. Ayotte, GOP, Nashua PD Free Press lawsuit to Hillsborough County Court Judge Robert Lynn because it was not clear that all Defendants assented to Removal. I didn't want removal because I wanted all kinds of cameras in the Courtroom, including those of The Riddley Report (see yesterday's Riddley Report video) but this way we are going to make Federal Law, which is more important for more electronic-only journalists. Along the way Nashua PD Attorney Brian Cullen (the only Defendant Attorney who has showed me the courtesy of a damn phone call) and I have exchanged pleasantries as the Ayotte and GOP Defendants waited until the last minute to Remove the case to Federal Court, literally hours before my scheduled hearing before Judge Lynn. Heck, I even sent him an email with an on-point case regarding Imperfected Removal, Joran v. Murphy, Unreported, N.D. Ohio, Western Division. No. 3:00CV7212. Sept. 5, 2000 (unreported). That's the way I've always been with any opposing counsel who wasn't a complete jerk to me.

Aside: You ever think about the fact that the major press has co-opted blogging, such that it's okay for a print journalist to have a blog, but if you don't have traditional print formats in large daily circulation you are "just a blogger." To hell with that nonsense. I won't have any of it, not when print and large-scale media entities use my material. The distinction is one without difference in the modern era.
So today Brian (yes Brian you can call me Chris, you've earned that as well, the other Attorneys have not) calls me to tell me about this and that he re-filed with the assent of all Parties notified. I was not able to determine if the Court is still mandating the 1 Nov. 2010 filing deadline imposed on Defendants, see the "Cayman Island Kelly Ayotte & GOP slither away" post. What I am able to determine is that Di Lothrop and Ryan Williams are completely disingenuous in trying to argue that I am not a journalist, that much is clear and both of them are lying fascist pigs, Di Lothrop had even invited me in, along with the acknowledgment of Nashua GOP Chair Dennis "I can represent husband and wife in a Divorce" Hogan (he can't) as clearly seen in the KingCast v. Ayotte, GOP Offer of Proof video, below.
Posted by Christopher King at 3:19 PM