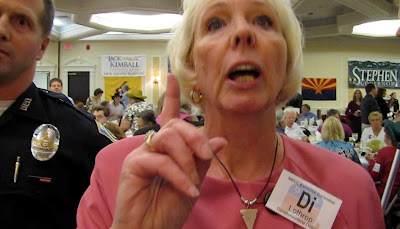 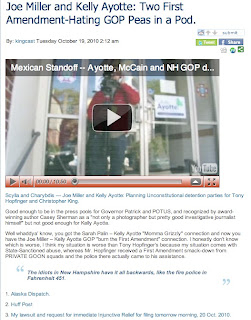 Cross post: Firedoglake.
I stand in solidarity with my Alaskan brother Tony Hopfinger, whom I hope utters similar words in an open Courtroom sooner than later. I am filing tomorrow morning and unlike the Defendants, I have nothing -- absolutely nothing -- to hide, although I will not show my proposed ORDER until later tonight.
"Your Honor, First Amendment cases like this one come about once in a lifetime so we have to get it right.
And getting it right means acknowledging that the burden of persuasion in a Free Press/First Amendment case is on the State – not me.  See generally Branzburg v. Hayes, 408 U.S. 665, 704, 92 S.Ct. 2646, 33 L.Ed.2d 626 (1972), New York Times Co. v. United States, 403 U.S. 713 (1971).
I don’t have to recite all of the First Amendment accolades I have received over the years, some of which came from the former Mayor of this City in the form of a Mayoral Commendation…… and I don’t have to belabor the fact that I wrote for a daily and weekly newspaper and freelanced for several magazines…..
No, in point of fact I don’t have to do any of that because my any measure, I am a journalist and the White House and Governor Patrick’s staffers have long since realized this so I roll videos and take photographs right next to the Governor and from the press gallery with POTUS.
But the only stated rationales offered by Defendants, by and through Di Lothrop -- and I have it on video – is that I was ejected because “You are not a journalist,” and “This is a private event.”
As neither of those two assertions were correct, the Defendants can never meet their burden.
With that Your Honor I’m going to sit down to watch them try, and to answer any questions Your Honor may have....."

Kelly_Ayotte,_NH_GOP_sued_for_Free_Press_violations.
Posted by Christopher King at 3:14 AM