"Storekeeper blog" is willfully stupid about Kelly Ayotte and the First Amendment. 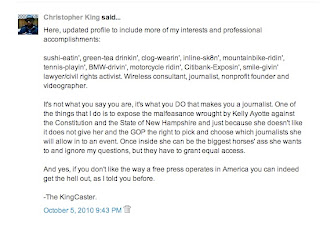 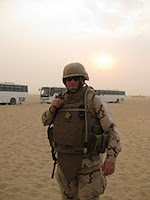 Some tool who seems awfully concerned about my opinions of Kelly Ayotte used his First Amendment freedoms to open up a blog claiming that I am not a journalist, despite my background as a licensed journalist and current member of NENPA. He writes:


I am a frustrated and annoyed member of the middle class who just wants America the way it used to be only this time without Racism, Entitlements and Liberals.

What a meathead. Stop me if I've heard this bullshit before, a la Michael Douglas' racist "Falling Down" circa 1993. First of all, Kelly Ayotte is a Class A racist, trying to prosecute me for Constitutionally-protected activity as Legal Chair of the NAACP to help a black man who faced 3 drawn guns and visual body cavity search by 3 white cops in Jaffrey, NH for LOITERING..... Anyway, I don't class people like that, and I work quite fine with many Republicans and conservatives, it is an issue-by-issue analysis. Read this letter from a white Republican with whom I partnered up on some nonprofit work a few years back.....


I have eaten with, spoken with, worked with, socialized with and argued politics with him. As a matter of fact, I’ve even let him near my kids! I was, and remain convinced to this day, that he is of quite sound mind. It is this trial that's crazy.....Chris may be guilty of many things: including non-stop questioning of and challenging the establishment, being one of the most dogged people I have ever met in pursuing an ideal...

My family and I have always found him to be an honest, hard working, warm, caring and sincere human being.... Chris’ big mistake was believing that he could make a difference in this whitest of states in our land of equality and "justice for all."

So anyway this clown opens up a blog claiming that I'm not a journalist, so I posted two comments to him, one of which reads as follows:

And as I mentioned to you, I don't need to note each and every aspect of what I do as a professional on my blog. (In addition to what I listed I'm also a founding member of a nonprofit that hasworked in Boston City Schools, and I put up wireless towers -- none of that is in my profile either, stupid). You have about 60 hits on my Kelly Ayotte blog so you already know I've worked for a daily and a weekly and have hosted radio shows discussing, among all things, the fact that my blogs have helped Joanna Marinova get the strongest First Amendment Counsel in Boston to go after bad journalists at the Herald.

Besides, Kelly Ayotte is the one with a vendetta against me and I have prevailed over her each and every time she tried to come after me for Constitutionally-protected activity. But thing is, she already considered me a journalist......

.....as does Casey Sherman, now run along and trash talk Casey for stating the Kelly Ayotte conducted no investigation into the Franconia shooting tragedy and Gregory Floyd's actions. He also notes that retired LE Bradford Whipple and I did the hard investigation of the case, which has resulted in a pending lawsuit with duly-licensed counsel helping the Kenney family seek Justice, whether you like it or not my friend.

Later man.
-The KingCaster.
Posted by Christopher King at 9:55 PM