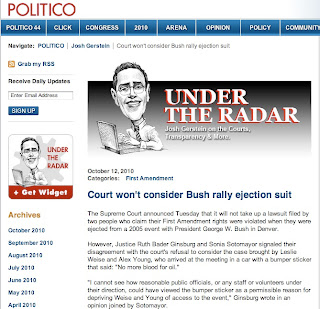 Dear Judge Holloway: This journal entry and this 12 Nov. 2010 Frederick Douglass entry comprise the definitive posts for my Free Press and Racial lawsuit against the New Hampshire powers-that-be. I read your dissent and will be contacting your clerks on Monday to alert them to the NAACP cases that are also on point, for future reference.
Everybody knows that Kelly Ayotte, the NH GOP and Nashua PD and I are going the distance on this free press case KingCast v. Friends of Kelly Ayotte et al. NH Dist. 2010-CV-501 because the NAACP v. KKK line of cases at  NAACP v. Thompson,  648 F.Supp. 195 D.Md.,1986. establishes a clear cut Constitutional Question. Now interestingly enough, I had forgotten about the then-pending case of Weise v. Caspar(dissenting opinion), 562 U.S. ____ (2010). New York Times and GRIID Journal ("Courting Disaster) and Politico coverage:
An appeals court that ruled against the pair noted that the Supreme Court has upheld the ability of parade sponsors to exclude groups whose message may differ from that of the sponsors. Ginsburg disagreed, saying the simple presence of the two at the event didn't amount to a distraction.
"Their presence alone cannot have affected the President’s message. Therefore, ejecting them for holding discordant views could only have been a reprisal for the expression conveyed by the bumper sticker. 'Official reprisal for protected speech offends the Constitution because it threatens to inhibit exercise of the protected right,'" Ginsburg wrote, quoting an earlier ruling.
The two dissenting justices noted that the issue could still be taken up by the high court because the suit rejected Tuesday targeted only volunteers responsible for ejecting the pair. Suits against government officials allegedly involved are still pending, the justices noted.
COMPARISON:
1.  The Denver Plaintiffs were issuing counter-speech.
2.  The Denver Plaintiffs were not journalists.
3.  I was not issuing counter-speech on the premises and I am most definitely a journalist.
4.  President Obama didn't get away with it either when he went after FOX.
5.  Also, I've got government officials and State Action involved in my case, i.e. the Nashua Police Defendants at two of the rallies told me they were operating at the behest of the political Defendants, and the Manchester PD arrived at the other event, after former U.S. Marshal Stephen R. Monier called the police on me even as I was standing on a public sidewalk. I took a picture of all of that and it's in some of my videos at YouTube KingCast65, so that might as well be State Action there too.
How funny is it that Republican Mayor Bernard Streeter respected my First Amendment efforts enough to give me a Mayoral Commendation, voted and approved by the City Aldermen. And the dirt that accompanies this case in terms of retaliatory actions taken by former NH AG Kelly Ayotte against yours truly and other black men like Michael Holman and Justice of the Peace and Federal Employee, Decorated U.S. Veteran Ralph Holder (public document request and Holder letter to NH Education Commissioner), who issue First Amendment Complaints against NH Government, is appalling and many high-ranking NH Officials are involved. It will all be in the Court record and submitted to SCOTUS, and that is precisely why City Counsel Brian Cullen is now living in my blog. Such a shame, I offered them to settle this matter in open court, on the record.
PS: First they claimed, by and through GOP Communications Directors Ryan Williams and Di Lothrop that I was not a journalist, even after Lothrop and Nashua GOP City Committee Chair (and newly-elected Hillsborough County Attorney) Dennis Hogan welcomed me in as a journalist after I signed in the same manner as all the other white stringers and salaried journalists, of which I have been both. All of this is preserved on video. They then claimed, and continue to claim that my conduct was oh-so-offensive and that I constituted some sort of threat to Kelly Ayotte or to John McCain. So the KingCast short feature at bottom, from a Portsmouth, NH event where I gained access because I filed the lawsuit, demonstrates my professional technique as I don't get too close to the subject, and never interrupt the subject. No function is interrupted by my presence, and I am often engaged in rational discussion with the attendees, watch the reaction of the Veteran at the VFW rally..... of all places to be discriminating against a Fundamental Right. Posted by Christopher King at 10:28 PM