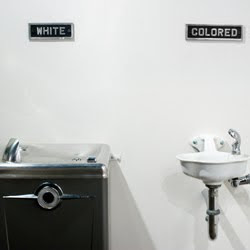 Your Honor, the top video is a good primer, and short. You can even witness an Ayotte-supporting U.S. Veteran like yourself growl at the practice of banning me from events "as long as you don't stand up and interrupt [speakers] in protest."
In this journal entry I went through all of my Free Press and Racial Discrimination case, KingCast v. Friends of Kelly Ayotte, NH GOP and Nashua Police, 2010 -CV-501 and the fact that NAACP v. Thompson,  648 F.Supp. 195 D.Md.,1986 is still Good Law and should have been argued in the Weise v. Caspar case before you, in which you correctly and stridently dissented. Perhaps you can use that law in the future should the situation arise again. As former NAACP Legal Chair of Southern New Hampshire I am appalled.
But sadly Your Honor, this oppression, steeped in racial antipathy, not just an isolated thing with the NH Legal Infrastructure. I'm certain you would never dream of allowing GALs or Family Court to bounce a black child out of a nicer white school in order to send them to a black school because of race yet this is precisely what NH did. It is a direct affront to Palmore v. Sidoti and Brown v. Board of Education as noted in my public records request, yet Kelly Ayotte refused to take the matter to the U.S. Supreme Court and the NH Judges unanimously denied review before the NH Kangaroo Courts.
To make matters worse, Kelly Ayotte and her friends -- as they are wont to do -- fabricated a story that Ralph Holder criminally-threatened people for pointing out the fact that NH Bar Disciplinary Office lied to him and said that GALs were not subject to review and stating that he would protect his Civil Rights. They charged him with a criminal offense, the same way that Kelly Ayotte and her friends charged me with a criminal office for writing a Demand Letter as NAACP Legal Chair. Mr. Holder's case was dismissed on a Directed Verdict and both of mine were dismissed as well.
At any rate, in fact GALs are indeed subject to such review, and NH Bar Counsel Martha Van Oot lied about it. They cited a 1988 case but they had to have known about this:

In re Boyle’s Case, 136 N.H. 21; 611 A.2d 618; (1992) the NH Supreme Court clearly established; “Where attorneys serve as guardian ad litems, even if the child is not a client, attorneys conduct is nonetheless governed by Rules of Professional Conduct.”

Sir, if you have any authority to initiate a Federal Investigation into the antics of the New Hampshire Law Enforcement and Judicial Community you would be doing the State, and the World, a huge service. I will leave you with these passages from the shameful child placement case that Ralph Holder and his child endured. I don't have time to get into redacting the original full docs but this will show you enough to make you cry:
**********

“In A.J’s best interest I recommend that he attend the Burnham School in Haverhill (MA)….Furthermore, the issue of diversity is real.   A. J. would likely find it lonely being the only Black child in a school in NH.  He has a rich Black Heritage of which to be proud.  He can share with and learn from other children of his color and it can enhance his growing up years in numerous ways.  In Haverhill (MA), he has that opportunity far more that it exists in NH.” –Patricia Frim, Esq., Court Appointed Guardian ad Litem, 07/14/03

“Ultimately, the court finds that the most important factors are diversity and crime. Given the information presented on the issue of diversity...the Court concludes that the Burnham school in Haverhill (MA) would be the more appropriate placement for A.J.”- Marital Master Harriet J. Fishman- Case No. 02-M-0032 (Approved Judge Gerald Taube).  08/05/03

“No appeal, however, is declined except by unanimous vote of the court with at least three justices participating. No justice who considered this matter voted to accept this appeal. Accordingly, the appeal was declined. If any justice who considered this matter believed the appeal should have been accepted, this case would have been scheduled for briefing. Declined.  Brock, C.J., and Broderick, Nadeau, Dalianis and Duggan, JJ., concurred.  Case No.  03-0640, (Declining to hear appeal of Case)

**********
And Guess what happened next Your Honor, for the coup de gras? Mr. Holder, who holds a Masters in Criminal Justice and a very high U.S. Security Clearance (he works under Secretary of State Hillary Clinton) wrote his then area State Representative several weeks ago. He asked her to initiate an Article 31 hearing and she shredded his documents: