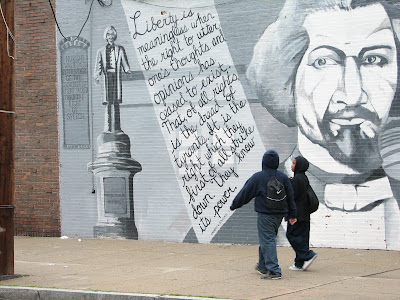 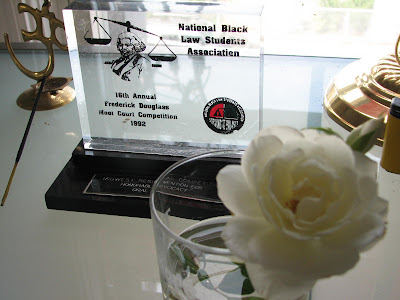 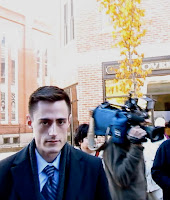 When WMUR and the Union Leader don't get their way, they get pissy, take a look at Adam Harding staring me down on this page and in the Senator Kelly Ayotte is racist video. Ha-ha, gotcha' dude. And they have no intentions of playing fair, they want to crush any and all alternative media the way they did at the Verizon Center shortly after I moved to NH. I should have known something was wrong in the Live Free or Die State.........
So I'm finishing up my First Amended Complaint for Electronic filing today or Monday, depending on how soon the Court grants my request, and I remembered the 2003 Hippo Press case of HippoPress v. SMG, 150 NH 304 (2003) that stands in direct contravention of NAACP v. Thompson,  648 F.Supp. 195 D.Md.,1986. In Hippo, (remember Henrietta Hippo and the New Zoo Review?) well anyway, in Hippo, the NH High Court overruled the Superior Court Decision to find that there was no State Action involved in establishing the Union Leader monopoly at the Verizon Center, run by SMG.
I am arguing that there is enough State Action in my case to issue an order against viewpoint-based and racial discrimination because you have state permitting involved and the presence of the police (just as with the KKK rallies in Thompson) to back it up at all three events from which I was expelled. You see them in full force in the Nashua Joe Arpaio and John McCain/GOP rallies.  And as to Kelly Ayotte's public Facebook Manchester rally I got U.S. Marshal Steve Monier to admit that he carried through on his threat to call the police on the witness stand, and they did indeed arrive just after I left, thanks man.
Contrast Hippo, in which you have city and state permitting -- and even ownership of the property -- but you don't have the specter of the heavy hand of the police to threaten an adverse reporter, and KingCast v. Ayotte, NH GOP and Nashua PD becomes a horse of a different color. Moreover, the distinction that is noted in the NAACP cases remains that Hippo, by placing its newspapers, was attempting to speak, whereas I am attempting to attend and report. This is why the NAACP lost in

Invisible Empire of the Knights of the Ku Klux Klan, Maryland Chapter v. Town of Thurmont, MD. 700 F.Supp. 281 (1998) (at leagle).
Thompson used the Pruneyard rationale the same exact way that I used it in the TRO hearing:

It bears repeated emphasis that we do not have under consideration the property or privacy rights of an individual homeowner or the proprietor of a modest retail establishment.  A handful of additional orderly persons soliciting signatures and distributing handbills in connection therewith, under reasonable regulations adopted by defendant to assure that these activities do not interfere with normal business operations ... would not markedly dilute defendant's property rights.

Even Justice Rehnquist concluded that there had been no unconstitutional taking in Pruneyard and held that the California Court's decision did not deny to the shopping center owners "their property without due process of law." Id. at 84, 100 S.Ct. at 2042. And the supervisory presence of such law enforcement personnel was, at the very least, a symbol of tolerance of the exclusion of blacks, physically enforced by the Klan. Furthermore, Justice Rehnquist added in  In Moose Lodge No. 107 v. Irvis, 407 U.S. 163, 92 S.Ct. 1965, 32 L.Ed.2d 627 (1972),

Our cases make clear that the impetus for the forbidden discrimination need not originate with the State if it is state action that enforces privately originated discrimination. Shelley v. Kraemer, supra.

In this case there is racial (denied) and viewpoint-based discrimination, both involve Fundamental Rights.
And contrary to mega-high powered McLane, Graf Defense Attorney Jack Middleton's naked assertion in open court, Pruneyard is not dead, it was again cited in 2007. See this San Diego mall case, Fashion Valley Mall, LLC v. N.L.R.B. 42 Cal.4th 850, 172 P.3d 742Cal.,2007. Remember, Middleton was for a time, Judge Landya B. McCafferty's boss; probably wrote letters of recommendation for her to get to the bench. So you would think he should know what he's talking about before he opens his mouth in Open Court, right. Just sayin'. Maybe perhaps it is I who knows more about the relevant First Amendment Law? Just sayin'.
And you know what else is funny? At no point in time did the actual property owners ask me to leave, so we have the Defendants asserting the rights of the property owner, time to note that as a Supplemental Objection to the Record. Fascinating.
*****************
So let's put all the uber-legal wrangling bullshit aside, shall we? Let's look at the public policy rationales. How can anyone living in a free society -- which America and New Hampshire claim to be -- contemplate for one minute that it would be legal to publicly advertise political events, hold them at facilities open to public, and to the Interstate Commerce Clause, and then discriminate on race and viewpoint? It's insane. Absolutely insane.
And try as the Defendants or Court may to paint me as someone threatening, at Summary Judgment we are going to watch my full unedited interviews of Massachusetts public officials and Joe Arpaio HIMSELF (goes to professional business practices and habit evidence to see that my behavior is not out of line and only becomes animated when people are intentionally obstructing my view of the subject. When it goes up on Appeal it's going to go up on the law anyway, so these little games are just part of the New Hampshire lynching process that I have to deal with for now, whatever.
If Thompson is going to be overruled in the First Circuit by this Court and/or by the Court of Appeals, we will then see if SCOTUS agrees with the way NH runs its First Amendment game in this instance. Frankly, I can think of no Higher Value Use of my Law School Education and photography skills than to expose Senator Kelly Ayotte and the GOP's racist and culturally hegemonic leanings, and how New Hampshire protects those leanings. The Key is to make certain you have a strong record so as not to lose any issues on Appeal. Unlike many Attorneys, I love Oral Argument and some Appellate work, doesn't scare me a bit. But a few hundred of my opponents ran scared in Law School when I grabbed that runner-up award in the Midwest BLSA Moot Court competition, LOL. And yeah, I earned an "A" in Constitutional Law, thank you Ted Mearns (last paragraph).
Related: Ridley Report, others are watching.
Posted by Christopher King at 6:11 AM