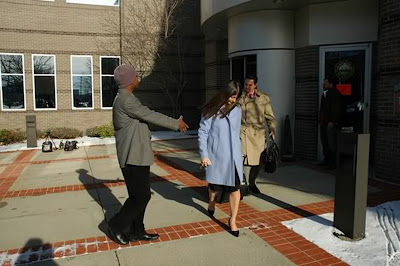 Photo: Martha Van Oot underling Maria Proulx, Esq., who refused to shake my black hand, and who definitely lied in Hillsborough Court and got away with it. Here is where Maria Proulx lied to get an enormous Extension of Time, and this is where she allowed her client to lie, just read the transcript noting that Gloria Timmons denied saying something that was on a tape, and she denied it via a Sworn Discovery Response signed off on by Proulx, after Proulx had no doubt also listened to the tape. I had the tape and it proved Gloria and Proulx lied about what Gloria said. I'm pretty sure I filed an Ethics Complaint on those issues that was immediately tossed in the circular file.
Video: At the same exact time her lies were being perpetrated on the Court in my case as they lost the right to keep the Transcript testimony off the Internet -- and to keep KingCast cameras out of court -- Proulx's boss was lying to Ralph Holder, another Dangerous Black Man (who has one of the Country's highest security clearances).
*************
Mr. Holder has a lawsuit related to the abusive retaliation he as received, including a bogus Criminal Indictment for Criminal Threats, NH Dist. 2010-CV-448. For more on that read yesterday's post containing my pending RSA 91-A Open Records request of NH AG Michael Delaney and NH Education Commissioner Virginia Barry noting that the NH High Court, on recommendation of Attorney Patricia Frim of Rye, and former counsel, Attorney Laurie Axinn Gienapp, allowed for race to be used unlawfully to segregate his child out of a good white school in NH to make him go to an inferior school in Massachusetts. That is illegal, Unconstitutional and just plain stupid Public Policy.
Attorney Van Oot, as disciplinary director, lied about the Guardian ad Litem's ethical responsibilities under the law and the NH Supreme Court refused to take action, against thereby violating Palmore v. Sidoti 466 U.S. 429 (1984) and Brown v. Board of Education, 347 U.S. 483 (1954).
This is the same High Court that allowed Kelly Ayotte's former sidekick Dan Mullen to misrepresent material things about me in his pleadings, some of which were published in an actual decision, by denying my Petition to Intervene as noted in my above RSA 91-A Request. It's nasty stuff going on here in New Hampshire, the whole place needs a fumigation, badly.
Oopsie-Daisy:
From Ralph Holder's 3 March 2006 letter:
The Committee asserted Ross v. Gadwah, 131 N.H. 391, 395 (1988) as the legal basis of its decision not to pursue my complaint against Attorney Frim. Attorney Frim engaged in unethical conduct, committed perjury, dishonesty and manifested bias when she advocated my son be sent to school in another state because he “would be too lonely being the only Black child” in the local NH school system where he was born and raise. As per the Committee: “[T]here is no attorney-client privilege…Nothing herein should be interpreted as precluding attorney’s from serving and guardian ad litems under RSA 458:17a. However, when so appointed, they do not act as legal counsel for the child but rather as parties to the proceedings.” Therefore, it has been determined that guardian ad litems are not subject to any of the rules of the Rules of Professional Conduct that make reference to a lawyer-client relationship. This includes most of the rules including (but not limited to) those dealing with competence, diligence, communications, fees, conflicts of interests and transactions with persons other than clients.”
In Boyle’s Case, 136 N.H. 21; 611 A.2d 618; (1992) the NH Supreme Court clearly established; “Where attorneys serve as guardian ad litems, even if the child is not a client, attorneys conduct is nonetheless governed by Rules of Professional Conduct.” I charge I was deliberately misled by flawed legal conclusions in a direct effort to hinder my efforts to seek legal redress of my complaint against Attorney’s Frim and Gienapp.
Posted by Christopher King at 11:46 PM