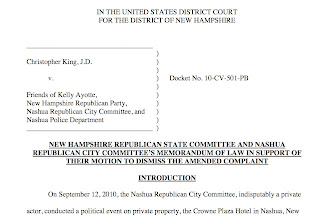 Note: They are trying to avoid discovery by filing this, but they confuse the role of a Motion to Dismiss with the role of Summary Judgment.  Let me explain this to you laypeople, and to Defendants' lawyers like Jack Middleton, who was 100% wrong on the Pruneyard line of cases, which were recently followed in 2007. In Open Court he stated that these cases were no longer supported, but see Fashion Valley Mall, para. 3.
You see the Motion has to be read with all facts construed in the light most favorable to Plaintiff, i.e. me. And I mean just the words on the page, is there any possible way that there I have alleged a valid claim based on some Federal and/or local jurisdiction. And once you do that you take a cursory look to competing Federal Law in the circuits to see if there is a colorable claim. Whether or not the Court ultimately accepts the persuasive law and how it applies the law in my particular case in the Summary Judgment phase is up to debate after the Court reviews all of the relevant facts and nuances of the case, such as the fact that Defendants' first line of defense was not "private event" but was rather "you are not a journalist."

Be that as it may, what it all comes down to is that this is a case of First Impression in this District: No matter how much the Defendants try to avoid it, there has been no other time when someone coming to observe and ask questions has been expelled from a publicly-advertised event held on commercial property subject to state and local permitting. Their cited case of Kay v. Bruno, 821 f.2d 31 (1987),involves a bloke who wanted to disrupt the planned rally in order to get on stage and to participate, which would have altered the course of the planned rally.
By contrast, try as they might, the Defendants cannot show where I halted or impeded any essential function of any of the three (3) events to which I sought admission. The programs went off without a hitch, and Defendants may not rely on mere speculation that I would have disrupted speakers, that's ludicrous given the acknowledgment between Nashua GOP City Committee Chair Dennis Hogan, Nashua GOP Communications Chair Di Lothrop and me, in which it was clearly established that I was "just coming as a reporter."
***********
So then this Court must reasonably consider persuasive law from another Federal Jurisdiction in order to compare apples-to-apples and when it does, the yield supports Plaintiff, i.e. me:
As NAACP v. Thompson,  648 F.Supp. 195 D.Md.,1986 shows (actual case at leagle) I've got a certifiable constitutional question, the Court can take Judicial Notice that the VFW and Crowne Plaza have to have State and Local permits (liquor, lodging, food & beverage) to operate.
And the law is exactly as I urged the Court to adopt earlier this week distinguishing the Kay NH case because I'm not looking to participate, rather to observe and to ask a coupla' questions. See Invisible Empire of the Knights of the Ku Klux Klan, Maryland Chapter v. Town of Thurmont, MD. 700 F.Supp. 281 (1998) (at leagle). That case held that the NAACP -- much like the Kay Plaintiff -- cannot barge in and command a place on the dais, but that's just common sense, something that the Defendants sorely lack.
And they also claimed that there is no possible 42 U.S.C. 1981 violation when I was clearly denied the Right to Contract on at least two occasions, when I offered money at the Kelly Ayotte FB rally for a ticket, and as to the VFW rally, heck I've already posted another VFW rally case where the Court specifically ruled that a denial in that instance clearly constitutes a 42 U.S.C. 1981 claim. And of course Civil Rights statutes are to be liberally construed in order to best effectuate the remedial purpose of the legislation in the First Place, particularly at the Pleadings stage, that's Civil Rights law 101. What they want to test my mettle on that? Please.
Anyway, is this recent enough for them? I already showed above where Jack Middleton was flat out wrong about the Pruneyard line of cases on which NAACP v. Thompson was based, so now I'll smoke him on the 42 U.S.C. 1981 argument, is this recent enough, Jack?
Williams v. Le Crewe De Spaniards, 2009 U.S. Dist. LEXIS 4852

Ridiculous, specious arguments from Defense Counsel. Whatever, we're headed to SCOTUS anyway.Theme of the Day: I'm just sitting here so patiently.... just trying to do this jigsaw puzzle... before it rains anymore (bull crap from the skies above)....
Posted by Christopher King at 2:00 PM