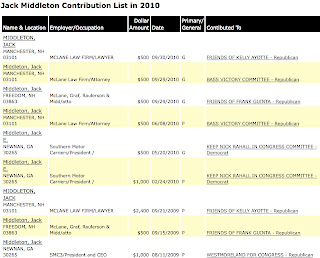 May it please the Court:

This is particularly telling in light of the fact that any reasonable person would assume that McLane, Graf is providing some legal oversight for Kelly Ayotte, given her four-year tenure there and continued support. Therefore her recent 7-month failure to file her U.S. Senate Disclosure Statement could be seen as a byproduct of this nefarious association because each and every one of these attorneys is aware, or should be aware, of these basic obligations, just as they were aware that Plaintiff should have been notified of the web of substantial association between these attorneys, Kelly Ayotte and Her Honor. Plaintiff became aware of this association because journalist David Ridley opined in one of his videos:
"GOP lawyers fight indie reporter demands for Ayotte access"
http://www.youtube.com/watch?v=sB3MMY-sUyc

....that Attorneys Middleton and Parent were "evasive" about their identities so this could show a plan, pattern and practice of deception that colors not only the nondisclosure at hand, but their entire Defense strategy.

They are all politically savvy and intelligent attorneys so it does not compute that somehow they forgot that Ayotte was supposed to file said Disclosure Statement, when she had a 77% increase in 2009, see Center for Responsive Politics feature Ex. 3, nor does it compute that they accidentally forgot to disclosure the relationships that could have mandated a recusal of the sitting Judge.
(Full document tonight).
Posted by Christopher King at 5:29 AM