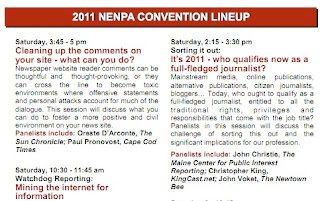 Foreward: The email to my peers under the bogus Kelly Ayotte indictment and fired Jaffrey PD (drawing disability payment) Marty Dunn criminal charges (all dismissed) when I was NAACP Legal Chair is in the comments. I've been waiting 5+ years for this moment.

So life can't be all about the new Triumph and waiting for springtime to use it to jet from media event to media event. No, indeed it isn't, so I turn my thoughts back to next week's NENPA Conference on the subject of who and what is a full-fledged journalist. John Christie and John Voket will join me.  This is my first entry on the matter noting, inter alia, that you are allowed to have strongly-worded opinions and still be a journalist. Heck, folks like the Boston Herald's Michele McPhee have strong opinions so I give it right back to her. Basically she said former Boston City Councilor Chuck Turner was a "bigoted moron" and I said she and the Herald are "racist tools of oppression, and proper subjects of successful Defamation lawsuits."
************** 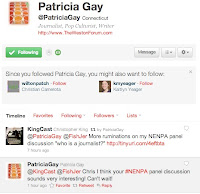 I have always liked Clarence Page, way back I was working in mainstream press. In this 2005 PBS segment he says "We're all journalists, just get your facts straight or lose credibility." As we shall see in this journal entry that admonition also applies across the board, ahem.

To my mind there are two key components to that equation and they involve access to crime scene information and reporter's privilege in States that recognize shield laws.


The Police access issue I deal with on an ad hoc basis, I just carry a KingCast business card and an admittedly expired NENPA card, explaining that they don't issue them anymore because it has become too confusing to, ahem... police. Then I turn to Mortgage Specialists v. Implode Explode, as I told Nashua, NH City Attorney about the NH High Court case that awarded full privileges to online journalists:


Freedom of the press is a fundamental personal right which is not confined to newspapers and periodicals. . . . The press in its historic connotation comprehends every sort of publication which affords a vehicle of information and opinion.

See it used in context in this journal when the GOP threatened to arrest me prompting further and ongoing litigation.


Implode-Explode dealt with two NH entities in a State the recognizes shield laws. Massachusetts does not recognize shield laws, which is good in case like Joanna Marinova v. (Michele McPhee Protege) Jessica Van Sack, Boston Herald et al, because as my Public Information Request and cour file review shows at least one EOPSS manager believes there is a "dirty cop" violating CORI laws and helping the Herald to commit Defamation. I'm pretty sure I know who this dirtbag is, but that's not for this discussion.


But in large part, on balance, we should have shield laws but the question in the modern global era of communications is this: What happens when you have diversity of jurisdictions? The mind boggles:


You get the picture, and the question is going to be what law governs, probably the state where the Plaintiff resides. The court addressed related issues in Price v. Time, Inc., 416 F.3d 1327 (2005), a wild decision issued on the matter by Federal Courts after the Alabama High Court punked out and refused to answer the question as Certified to it by the Federal District Court.  The Decision (on the statutory and to some extent on the general First Amendment Privilege) cuts against the principles enunciated in Implode Explode because the Court found that Time/SI were not journalists within the meaning of the Ala. Code § 12-21-142 after this and other steamy passages appeared (it wouldn't be KingCast without some sex ever now and then, natch).


At about midnight [after leaving the club] Price headed back to the hotel. He eventually met up with two women, both of whom he had earlier propositioned for sex, according to one of the women, who agreed to speak to SI about the hotel-room liaison on the condition that her name not be used. The woman, who declined comment when asked if she was paid for the evening, said that the threesome engaged "in some pretty aggressive sex." She said that at one point she and her female companion decided to add a little levity to the activity: "We started screaming 'Roll Tide!' and he was yelling [**7] back, 'It's rolling baby, it's rolling.'"

Unfortunately Reporter Yeager, much like Van Sack, ran the story about sex without talking to everyone involved and got his ass handed to him in Decisional dicta. Okay so enough of that, and all I can tell is that the case likely settled after the Court ordered that the Plaintiff had not exhausted any and all other possible avenues to determine the identity of the sources.


Update, whoa wait a minute: I just found L. Michael Higgins' excellent "Rusty Shields" law review article 37 Cumb. L. Rev. 263 that sums it up quite nicely. I've got to find the writer and forward this journal entry to him.
**************
The more important wake-up call derived from Price is that members of the news-gathering and disseminating community who do not happen to work exclusively in the statutorily favored trinity of news services (newspapers, radio broadcasting, and television stations) still do not know with any degree of certainty whether the assurances of confidence they give to their sources will be respected by the courts should litigation or prosecution ensue.


This situation is not peculiar to Alabama or state law. Testifying before the Senate Judiciary Committee in the summer of 2005, Time Magazine's Matthew Cooper, one of the two reporters implicated in the Valerie Plame investigations, expressed his frustrations with the current state of journalistic protection:
The rules of the road as I try to do my job as a reporters [sic] are chaotic at best . . . . Right now, if I pick up the phone and call a senator or his or her staff or a civil servant and they say, "Don't quote me on this, but . . ." or "Don't identify me but . . ." I can't really know what I'm getting myself into assuming what follows is important and controversial enough to rise to the level of litigation. . . . As a working journalist, I'd like to know better what promises I can legally make and which one's I can't.  n150

Well in point of fact many of us would like to know the same thing... and that is why we are about to engage in this forum.

Posted by Christopher King at 6:52 AM