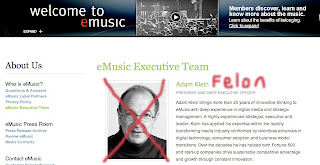 Time out from Kelly to deal with this knob-job:
Dear Provost Steele:
Well I’ll be a monkey’s uncle. First You have to deal with David Epstein's incestuous relationship with his daughter, now this:
This is potentially  a case of first impression because I can’t find any other case where an adjunct, associate or full professor withheld resume information about being a Convicted white-collar Felon. What Adam Klein did to Boumat, Ltd. is similar in timbre to what George Castro allegedly did to you, and if you didn't take it from Castro then you can't take it in Klein's background either, $320K vs. $5M same sleazeball intent.
Note: I doubt Jeffrey Denner or Linda Ouellette ever petitioned the Court for Klein to pay their attorney fees, a basic move in this sort of case. It serves as disincentive for the Defendant to engage in dilatory and dishonest tactics. I never did much Domestic practice because it's just a horrible thing all around, I did two amicable divorces and felt like I needed to puke weeks after each. But even I would be surprised to learn that Denner and his posse never busted a grape on that. That right there is tantamount to legal malpractice in my books, and I sure do know about that, having forced Denner and Kevin Barron to pay out to Derrick Gillenwater in 2009 after they provided ineffective assistance of counsel.


Not only is Columbia University’s Adam Klein a convicted felon, but if the mother of his first child had been given the opportunity to argue her case, he may well have been returned to South Africa for imprisonment because he arguably committed Perjury during a series of lawsuits in Massachusetts. One such lawsuit was filed by Frank Kinzie of Quantum Associates, and it pertained to $90K of the attempted $320K heist that Klein attempted. If you would like me to pull the file I can do that for you and send you the pertinent documents excepting the confidential Settlement Agreement.
At the time he potentially committed Perjury in a Deposition with Mr. Kinzie, Adam Klein was subject to a Good Behavior Order as seen below, kind of like another one of my investigative subjects Gregory Floyd was under before he violated it…. And went to prison, where he sits today subject to a lawsuit NH Dist 2010-CV-181 that came about largely because of my efforts.
But I digress.
I raise these issues in the context of the quest for Journalistic Integrity that binds all of us together as professional journalists.
Note: Adam Klein’s South African Rap Sheet.
Note: Adam Klein is a lowlife journal entry.
Note: South African Prokureur-Generaal Statement to Boumat, Ltd.
Note: This open letter in wepapers format.
By now even the casual observer of this journal knows that I edited the Cincinnati Edition of

Ohio’s Call & Post, the only statewide black-owned newspaper before I reported with the Indianapolis Star. You should be familiar with these publications, as we both hail from the Buckeye State.
After law school I came to watch my first cousin blossom into the most recognizable black (or any other) sports journalist in the World. This is why I notified his alma mater of this issue. And his cousin was in turn one of the most recognizable black (or any other) anchors in the World. In point of fact she moderated a U.S. Presidential debate.
While they pursued more traditional paths in journalism, one thing that all of us have in common is that nobody could make a legitimate argument that any of us knowingly misrepresented anything on a job resume or in a story or journal entry.
**************
Sadly, unless Columbia’s policy allows for Felonious faculty members, it does not appear that the same cannot be said for Columbia adjunct faculty member and eMusic CEO Adam Klein.[1] If he lied on his resume or application the simple fact is that he could be fired and the termination upheld even if he was fired for a different untenable reason and after-acquired evidence uncovered the falsification. Jordan v. Johnson Controls, 881 S.W.2d 363 (1994), Redden v. Wal-Mart Stores, 832 F. Supp. 1262 (1993)(black employee had theft by conversion conviction, ahem). In Colorado v. Saga Communs., 11 F. Supp. 2d 1292 (1998) (omitted and concealed a place of employment 10 years prior) provide the relevant analysis for us:
However, the Colorado Supreme Court, relying extensively on Gassman I, has addressed whether resume fraud acts as a complete bar to breach of employment contract claims:
[We] hold that after-acquired evidence of resume fraud may provide an employer with a complete defense to such claims.
To assert the defense of after-acquired evidence of resume fraud, an employer must prove that the employee's fraud was material and that a reasonable, objective employer would not have hired the employee if it had discovered the misrepresentation at the outset. The following factors are relevant to that determination.
First, would a reasonable employer have regarded the misstated or omitted fact as important? The nature of the misrepresentation and the extent to which it relates to qualifications for the job may bear on this issue.
Information about the employer's past conduct or policies may also bear upon this issue by focusing on what the employer regarded as important in a non-adversarial context. The second factor is whether the employee concealed or misrepresented the fact or facts with the intent of creating a false impression in the mind of the employer, citing Crawford Rehabilitation Services, Inc. v. Weissman, 938 P.2d 540, 549-50 (Colo. 1997) (en banc) (citations omitted).
****************
As noted in one of the prior journal entries, I have had very close association with associate professor staff at Columbia and personal friends who have graduated from Columbia over the years, this will happen when you go to prep school. And again, each and every one of them is a stand-up individual as are their friends whom I have met in NYC and throughout the Country. As to the Professor, had there had been a pregnancy and child born I would have stood by whatever agreement we made, unlike Adam Klein. 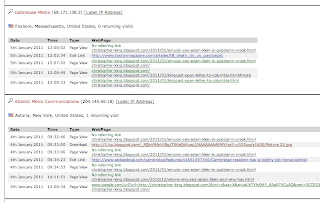 Regardless of Adam Klein’s familial issues, it is clear that Senior Staff owes the International Academic World an explanation on this for several reasons:
First, every job application asks the Golden Question, “Have you ever been convicted of a Felony?”  Without making too complex a syllogism here, let’s just say that whomever did the vetting didn’t care or Adam Klein lied. Either way an explanation is in order.
Second, this is a newsworthy event because it almost never happens. We’re used to seeing community college cocaine-smuggling falsifiers like David Silbergeld get the hook, or Harvard’s monkey-man Robert Fogel catch a reprimand from the U.S. Department of Health and Human Services after his misdeeds. It takes a while to prove data falsification. The same goes for Harvard’s Marc Hauser or MIT’s Luk Van Parijs, who was fired for data-doody as well.
Living a material lie and using that lie to gain access to the University before you commit further misdeeds cannot be tolerated either, and some learned Judges believe the gross falsification is an absolute bar to employment in the legal context.
Office of Disciplinary Counsel v. Ragbirsingh, 535 Pa. 587  (1994).
The Disciplinary Board favored a three-year suspension. This Court is prepared to accept the latter sanction. I dissent on the grounds that the only suitable course of action is to issue a rule to show cause why he should not be disbarred.
The central focus of our attention should be on the issue of itself. This is not a case where an attorney was admitted properly and subsequently engaged in unprofessional [***4]  conduct. Rather, the conduct runs to the question of whether he was eligible for admission in the first place. As I have indicated in my accompanying dissent in Office of  [**266]  Disciplinary Counsel v. Deborah Griffin, 637 A.2D 266, the Commonwealth has a reasonable right to reconsider that admission itself……..Failure to disclose falsification should be treated as fraud on the Court: it destroys all subsequent proceedings.
As such, this is not Weinstock v. Columbia Univ., 224 F.3d 33 (2000) where we are sharing opinions on whether or not someone with a proven Academic track record (and no criminal record) gets tenure. No Sir, No Ma’am. Here we are merely talking about holding the bar of admission somewhere north of the cesspool.
*************
I’m quite certain that a lot of people in the Office of the Provost are mulling this one over as you should. As you must.  As you  do that we cannot forget that the University Press has an obligation to monitor, to police and to report (5 points for parallel structure) lest it fall short of the duties and responsibilities incumbent on the Fourth Estate.
I have more information than I’ve let on, but for now I will sit back and watch, perhaps wait for a phone call and just see whether one of the Institutions that earned my trust and respect – and there are not many of them in that category – deserves to keep it.
[1] I am all in favor of CORI reform here in Massachusetts for the rank-and-file employee who makes a single youthful misjudgment, but white-collar crime involving a corporate executive and professor with discretionary authority is a horse of another color.  Incidentally, Massachusetts is where Adam Klein’s daughter sits, waiting for her father to show her or her mother any measure of respect. This is odd given that Klein pursued her in the first instance by leaving a note on her car approximately 8 months before his daughter was conceived. He had been watching her take laps in the pool. The sexist Massachusetts Court of Appeals in issuing a not-for-record Opinion on the contractual agreement that Klein stopped paying 6 years in wrote that they had “a rather brief relationship,” implication being obvious.  I won’t tolerate it, it takes two to tango, and this tango lasted for the better part of a year, folks. Just the facts.


As I said, I'll be a Monkey's Uncle Ruckus:
Posted by Christopher King at 8:32 AM