KingCast sees Kelly Ayotte supporter Bill Christy cry to YouTube again: "I don't want anyone to know I called Chris King a nigger and a motherfucker." 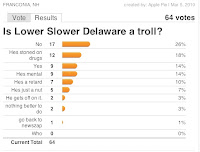 Update to Sarah Richard: This time the request came from Jon Christy, Bill Christy's son, as he apparently is not aware of the general principles of Res Judicata. Jon, this issue has already been reviewed. Also your daddy called me "duplicitous cunt," being ignorant, bigoted, racist and sexist all at once. The apple fell straight from the tree I see.


5 March 2011:
Re: Bill Christy’s request to have YouTube remove the fact that he called me a nigger and a motherfucker.
Dear YouTube Officials: (The so-called complaint is in the comments)

I wrote you about this situation involving Internet Troll Bill Christy 13 months ago in this post:
http://christopher-king.blogspot.com/2009/12/kingcast-writes-blogger-and-youtube.html
KingCast writes Blogger and YouTube officials: Please provide your opinion on the issue of Hyperlinking, criticism, Fair Use and IP Infringement.
.....and in the potty-mouth post:
http://christopher-king.blogspot.com/2009/12/kingcast-says-potty-mouthed-bill.html
And I told Bill Christy six months ago:
http://christopher-king.blogspot.com/2010/10/bill-christy-of-bill-christy-project-is.html
Bottom line Billy Boy: You've got my address. If you say that's not your voice in the video, then bring a case and you can walk your dumb ass into Court and you can say that Under Oath, then I will produce the phone records and the sim card from my camera that documented the upload when I shot the video. Then I will know your real identity, you'll have to come out from under that white sheet. Come on man, don't be scared.... nothing to worry about because you're telling the Truth, right? Put up or shut up.
Bill Christy called me on my own telephone and called me a “motherfucker” and I have the phone bill to prove it and he knows it. Bill Christy, while posing as a former Judge Advocate General of the U.S. Military, also claimed that Al Sharpton and I were both “niggers.”

Click the thumbnails to see where these idiots saw no problem with Bill Christy committing what was at the time a Federal Offense.
http://christopher-king.blogspot.com/2010/10/kingcast-shows-how-kelly-ayotte.html
He publicly wrote that I could not please my girlfriend because she stated she had a bisexual encounter.


He publicly wrote: I am 5'11" and weight 185 pounds and I could kick you(sic) ignorant little black ghetto ass any day of the week and not even break a sweat.
The world will indeed be a better place when you are found dead someday."
And he did it in a forum designed to address the concerns of a dead child:
http://www.topix.com/forum/city/franconia-nh/TN85VE6SATBDSV8QK/p21

Bill Christy is a man who interjected himself into my life, unsolicited, claiming to be a supporter of the Franconia Collective, an association of people who support open government relative to a certain double homicide in Franconia, New Hampshire. After substantial review he wrote the bulk of a memorandum entitled “Try Gregory Floyd for murder” that I edited (I have the emails to prove this) and then he wrote that he “would have shot Corporal Bruce McKay as well.”

http://christopher-king.blogspot.com/2010/03/bill-christy-finally-admits-that.html
http://christopher-king.blogspot.com/2010/02/kingcast-applauds-former-jag-attorney.html
He then flip-flopped and claimed to have written a Massachusetts Senator about me while I had pending legislation written through his office to protect people who live in underinspected buildings. He publicly and falsely claimed that I criminally threatened him and people such as the other idiot referenced in the video Ditmar Kopf (who also interjected himself into the Collective, unsolicited then lied about how his money was spent but I had a witness so he had to shut up) yet never once brought a charge even though I told him to "get on with it."
He has followed me around on the internet for the better part of 4 years now, claiming I was not a former Assistant Attorney General, claiming I was a victim of child abuse, that I was a psychopath and other nasty and false things. He and a gaggle of idiots opened and maintained a Topix site entitled “King Bash Here,” and several other similar threads with the sole purpose in mind of calling my credibility as a journalist into question, and talking about my testicles, which allegedly had not descended. He and his friends had little pet names for me including Tar Baby, Eunie (Eunuch) and many others.
Last month the New England News and Press Association (NENPA) invited me as a panelist at their 2001 Annual Winter Conference. I make corporate video and write for a local Boston Newspaper where I may mention this issue if I feel like it because virulent racism and hatred like this, coupled with posing as a military officer while internet stalking someone is newsworthy:
http://dirtywaternews.com/index.php/style/your-style/boston-life/642-boston-blogger-the-fighters-dorothy-aufiero-sets-her-sights-on-her-next-big-thing
You heard me correctly: Bill Christy repeatedly lied to me when I asked him whether he was really a JAG or not, and his buddies all knew he was lying and admitted it.
A movie is in development that is a screenplay adaptation of Casey Sherman’s book “Bad Blood: Freedom and Death in the White Mountains.” Sherman credits Officer Bradford Whipple and me as “two men who refused to let this case die” and further credits me for obtaining a video – through my own litigation – of McKay’s rough arrest and OC Spray of a young woman. In video he cites me first after his family as someone who helped make the book possible by providing him documents “when the trail grew cold.”
Among private citizens who have never been law enforcement it is possible that no one knows more about this case than me. Please review two recent KingCast short films to Producer Dorothy Aufiero:
F-Bombs Away! Melissa Leo, Christian Bale and the Fighter KO the comp at 2011 Oscars
http://www.youtube.com/watch?v=C_fSL93cjMM
KingCast brings Dorothy Aufiero and Moody Street Pictures to Franconia
http://www.youtube.com/watch?v=iKov39AyZyE
In sum, Bill Christy is a man who identified himself publicly under his name, and he robustly criticized me and arguably defamed me for years and personally telephoned me to call me a motherfucker and wrote that I am a nigger, now he wants to remove any and all evidentiary trials, and he is particularly pained now that a former custodial child of his who lives right down the street from me in Boston notified me that Bill Christy slept with his mother while she was still married and was an abusive man.
He has no basis for asking you to remove this video whatsoever.
I look forward to your review and a dismissal of his complaint, perhaps next time he will keep his stupid mouth shut. Or in his own words that he uses when he’s not trying to suck up to you, “Fuck this motherfucker.”
Respectfully submitted,
___________________________
Christopher King, J.D.
Posted by Christopher King at 5:44 AM