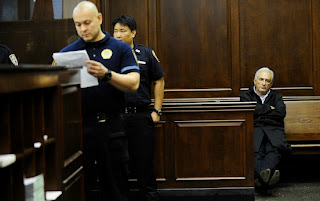 Emmanuel Dunand/Pool/APDSK photo by Emmanuel Dunand/Pool/AP
What is it with these f*****g guys who (allegedly) act as if their money and power puts them beyond the reach of the law? Maybe perhaps they have learned such behaviours through observation and experience..... Well as NPR reports at least this guy targeted a woman old enough to legally drink.... as opposed to the allegations against William O'Connell, Statutory Rape of a woman 14-16 and 19 golden grams of cocaine..... anyway, is that some sort of silver lining? Dude catch a clue: Meet a nice lady, have sex and chillax.... if you can't meet a nice lady when you need it, then wait like the working stiffs or use your goddamn money to BUY A HOOKER who will do whatever you bloody well please, you dumbasses. And let's not forget the IMF is a filthy organization anyway, recall the 1944 party in New Hampshire?
"The 32-year-old woman gave this account, according to a police spokesman: At approximately 1:30 p.m. Saturday afternoon, she was told to go to clean Strauss-Kahn's suite, which she understood to be empty. Instead, Strauss-Kahn emerged from the bathroom clad only in a towel, chased her in the suite, dragged her to a bedroom and began to sexually assault her there. She told police that he then forced her to perform oral sex on him before she was able to break free. Staffers at the hotel called police, but the suite was deserted by the time officers arrived minutes later. The woman was taken to a nearby hospital, treated there and released....."
Posted by Christopher King at 11:13 AM