That's right... move along.... nothing to see here, folks. More on this later, but I have noticed that I can't recall seeing a case survive Summary Judgment in a NH District Court. Every time I do research it is Summary Judgment City. Now granted I am making a record that I believe will be suitable for SCOTUS anyway but still it is more than a bit troubling to think about, particularly in light of what I know about Ralph Holder's case and Michael Holman's cases as well as Mr. Bourne's case against the Town of Madison. In Mr. Holder's case the NH Disciplinary wonk Marta Van Oot straight out lied to the guy and got away with it. The First Circuit just dismissed Mr. Bourne's case that I referenced herein (with the other gentlemen referenced), and here is his response:

Mr. King,
I find it very suspect and interesting that they are so pissed of the Internet postings that they quickly came out with this crap court order in my case.
How much political influence came from Ayotte in my case to deny my rights with the 1st circuit court? Just like her scheduled appearance in Madison and now this, what's the connection? Being a senator gives her great power to abuse the system......
So either way, continue to spread the word. let people know they are screwed before they even walk through the door of the politically corrupt court system.
If you look at every Civil case before the NH Federal Court, you will find they always end in SJ motions being granted to dismiss. NO Civil case goes to Trial up there. None.

I would love to do a statistical analysis of cases filed vs. cases surviving SJ in all of the Federal Districts. I am certain that NH would "lead" the way for successful State defenses, why that is..... is anyone's guess, I'm not going there.
Meanwhile Attorney Cullen and I have been discussing my posting on the matter and I am very open about everything I say and do. Here then is his email to me this morning and my response to him after I accused the Town and counsel of committing "contemptible" acts after Judge DiClerico..... found the Town.... in "Contempt." 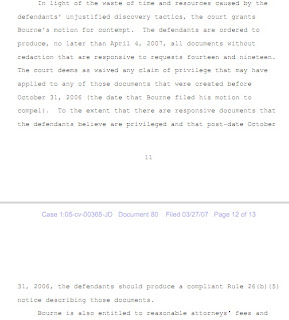 Brian Cullen to me
show details 7:56 AM (5 hours ago)
Chris.
Timing being what it is, yesterday the First Circuit affirmed the grant of summary judgment to the defendants in the 2005 Bourne federal litigation.  I have attached a copy for your review.  It also upholds the various ancillary orders of the USDC.  The order, thus, also puts to bed Mr. Bourne’s unfounded allegations that the defendants – and I in particular – engaged in discovery violations.  In this regard, I have attached the definitive ruling from the court on this matter.  The court’s order is the final word on what was nothing more than an honest disagreement about what materials were discoverable in the federal court action.  As you will see, the Court rejects Mr. Bournes’ assertion that the defendants engaged in discovery abuses in the case.
Given the court’s order and yesterday’s First Circuit ruling, I am asking that you amend your blog immediately to withdraw the language claiming that I “intentionally with[held] evidence” or that the action was “contemptable” - which, in common parlance, suggests that it was worthy of hatred - and all suggestions that I might engage in improper activity in your case, Mr. Ridley’s situation, or any other matter.
I think you will have to admit that I have endeavored throughout this litigation to keep our pleadings and communications at a professional and even amicable level even as we express our disagreements on the legal merits of your claims.  You have always done likewise in our private communications. Thus, I am dismayed to see that you would simultaneously defame me to the world at large in your blog.  I will not pretend that I am going to pursue legal action over this matter, but with possession of the above rulings, I trust that you will make the necessary corrections and that we can return to our prior, more professional discourse.  If you feel the matter requires further discussion, please give me a call.
Brian
Brian J.S. Cullen, Esq.
CullenCollimore pllc
10 East Pearl Street
Nashua, NH 03060
603-881-5500
www.cullencollimore.com
This email may constitute privileged attorney client communication or attorney work product.  If received in error, please notify sender and destroy all copies.
2 attachments — Download all attachments
Reply|
Good morning Brian,
I have not defamed you nor would I ever want to try...... While the "contemptible" comment strictly refers to the order from Judge DiClerico I will be more than happy to post the updates on the case and to make certain that no one could reasonably believe that the comment refers to anything other than that particular Order.
The DiClerico Order still stands, right? As I understand it, what did not survive was Mr. Bourne's allegations that subsequent discovery violations occurred, correct?
That having been said, the guy got screwed as did Michael Holman, who is lucky to have all of his children to this very day. Same awful cast of characters, Pickering.... Ayotte..... ick.
I will review all of my posts on all of my journals and uniformly update them today!
- Show quoted text -
--
Christopher King, J.D.
http://KingCast.net -- Reel News for Real People
617.543.8085m
To keep the record straight, the first case I won on the merits, the other two State court complaints were thrown out due to political influence, res judicata, and failure to state a claim, for the causes of action that could bring criminal action against the town officials.
They sure know how to cover up the local corruption.
let me know when you have the whole 1st circuit pleadings online, (docket 10-1718).
Thanks
Sam
Hi Christopher

Wow, the recent 2011 Court order demonstrates that the 1st Circuit Court of Appeals is just as politically influenced as the NH Federal Court, which has permitted and condoned the trampling of property rights, and the wrongful enforcement of a 2003 waiver that was signed under duress, and by way of deliberate coercion and/or blackmail.
To allow Madison town officials to continue the harassment and violation of Civil Rights against an outsider from Massachusetts from 2003 through 2011 should not be tolerated in any case.
In addition, to allow Madison, NH town officials to commit perjury, conceal evidence, order the police chief Pickering to harass you and who-ever else they want, is an obvious injustice. But, what makes matters worse is that both Courts have condoned the actions by the defendant's attorney Brian Cullen, who commit perjury within the pleadings, falsified interrogatories, and assisted his clients in concealing and destroying incriminating evidence, which is simply outrageous.
Just another example of our Constitution being trampled by the ignorant Government officials who are nested in the system to promote their own agenda at the taxpayers expense.
It is also evident that the appeals Court may have been fearful that if they reversed the lower Court order, it would have created case law to support the rights of so many others who have had their rights trampled too. But as evident by this 1st Circuit Court Order, your Rights to actual justice is a myth.
You should take notice that the appeals Court Judges would not even sign their names to the questionable and unjust Court order.
This recent Court order also confirms you don't have a prayer for justice in New Hampshire, especially if your an outsider.
My recommendation would be for all Massachusetts residents to boycott New Hampshire, and then spend your money in the State of Maine or some other State.

Sincerely
Sam Bourne
Posted by Christopher King at 10:29 AM