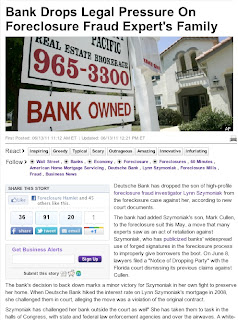 I told some of you many years ago it was only a matter of time until the KingCast cameras hit the Big Screen on a matter of public interest, and that time is now arriving. I believe Rodney Class, Carl Weston, Todd Wetzelberger, Neil Garfield and Foreclosure mill Attorney Thomas P. Dore will be approached for commentary as well, but Dore will likely refuse. Smoke and MERS will receive a permalink here, MortgageMovies will receive a dedicated section there and Attorney Szymoniak (Mortgage Movies 60 Minutes Journal Entry with NH BK Trustee Lawrence Sumski hating on me) will issue regular columns to boot. I am checking with her to make sure she is agreeable to a role in the movie but I predict no problems there. As a producer, I will introduce Senatory Ayotte as representative of the class of malfeasant public servants. Here HuffPost reports the latest on Lynne's case, with Deutschebank finally dismissing a hateful, retaliatory case against her son.
Meanwhile note the Judicial corruption back in my home State of Ohio, with Judge Steven Terry from my birth County catching a Federal conviction for mail fraud with related issues tied to a foreclosure case:
********
During closing arguments Friday, the prosecutor said there are recorded phone conversations between Terry and former Cuyahoga County Auditor Frank Russo that proved Terry was corrupt.
“I did what you wanted in the case. I took care of the issues and denied all motions,” Terry allegedly said to Russo during one of the calls from July 2008.
***********
Sadly, just as with bad cops, there are more bad judges like this throughout the Country, poisoning the Justice pool. Americans have had enough of this and we are coming to take our Country back.....
The Revolution will be televised right here, and in Cannes.
Related video certain to make the final cut: 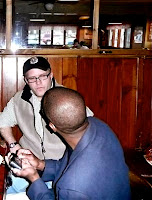 1. Rodney Class visit to Capitol Hill part one (part two coming this weekend).
2. KingCast/Mortgage Movies visit to Senator Kelly Ayotte's Office and related Senate Ethics Complaint against her Chief of Staff John Easton.
This should make Kelly a superstar; her actions are already part of the Dorothy Aufiero adaptation of Casey Sherman's best seller about the Franconia shooting coverup, "Bad Blood: Freedom and Death in the White Mountains." Watch this KingCast movie to Producer Aufiero; there is the author and Yours Truly discussing pertinent details on location in Franconia three (3) years ago. And did I forget to mention the Michael Paulhus case where Kelly Ayotte failed to punish Nashua's finest after they violated Miranda, shot a guy and posed as State AGs? Forensic specialist Paul Erwin Kish and POTUS didn't. Query, will Kelly join us in the limo for the premiere I wonder.... I was going to order up a Prius stretch but as she doesn't care about the environment I say let's go for the SAAB Turbo or Mercedes Pullman or a 600 SE/SEL 6.3 liter.

Posted by Christopher King at 11:55 AM