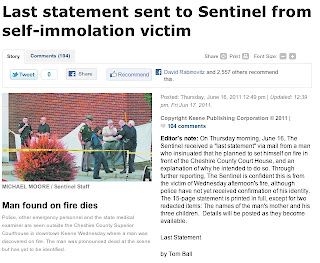 Is NH media once again keeping disturbing information from the Live Free or Die State on The Low? Shocking!
Tom Ball's last statement as recorded in the Keen Sentinel:
A man walks up to the main door of the Keene N.H. County Courthouse, douses himself with gasoline and lights a match. And everyone wants to know why.
Apparently the old general was right. Death is not the worst of evil....
A KingCast Golden Oldie in front of the Cheshire County Courthouse, from when I was NAACP Legal Chair and that idiot NH AG and her idiot (fired) pal, Jaffrey NH Chief Marty Dunn tried to put me in prison for exposing police abuse. WMUR pawn Ray Brewer and his editing s(crew) gave me a 7-second perp walk and little else, too bad I had my own media posse with me so we hung 'em high, yessum.......

In honor of the self immolation victim who apparently lit himself on fire in front of the Cheshire County Courthouse yesterday, just a few feet from where I stood back in 2005. You should see the Keene Sentinel's Melanie Plenda deal with the retraction/correction issue after that idiot (fired) Prosecutor Bill Albrecht offered her a yogurt "or anything you want" while he baited and switched up the charges on me as NAACP Legal Chair. He's a cock-a-roach, a real scumbag prosecutor just like the company he kept. Everything dismissed and I'm still going strong today, thank goodness. Tom Ball didn't fare so well.
Read what happened in my case below the fold.
Now Prosecutor Cleary, who replace Albrecht after his own crash and burn, was reasonable, looked at the bullshit case and dismissed it.
Or more accurately he nol-prossed it, making it damn near impossible in NH to sue, even though it was a ridiculous proposition from the get go that the NAACP couldn't send a demand letter to Chief Dunn in light of Willie Toney taking three (3) loaded police guns to the face and visual body cavity search for LOITERING.
Read the Kelly Ayotte UPL dismissal here.
Read the flippin' Demand Letter here.
What a waste of taxpayer money that whole thing was.
C
Posted by Christopher King at 10:05 AM