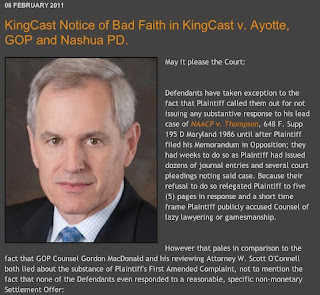 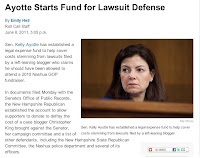 His Honor granted the Motion to Stay in one day over my opposition (link coming) and even though Defendants had already answered my pending motions except for the Third Amended Complaint Motion... Dang, and I had just shown how Senator Ayotte Defamed me to the folks on Capitol Hill as she sought funds to defend this lawsuit. Dang, and I had just prepared to send off the DVD containing more proof to support my pattern and practice allegations because Nashua's finest teased Mike Gannon about KingCast and Dave Ridley videos when they maced him and tuned him up on 1 July, 2011.  (Note: The iDVD is still in the mail regardless, make my record.....) See top and bottom KingCast videos in this entry. Here is yesterday's journal entry in which we see that Plaintiff Requested Reconsideration on the Notion that his Motion for Recusal of Magistrate Landya B. McCafferty was "Utterly Without Merit." 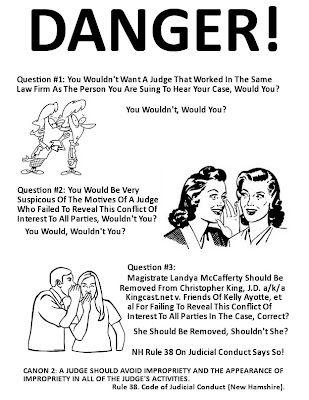 This despite the fact that Magistrate McCafferty worked at the same law firm as Defendant Kelly Ayotte, and under lead Defense Counsel Jack Middleton and next to Second Chair Jennifer Parent. As you can see from the entry, Magistrate McCafferty routinely recuses herself when certain attorneys appear before her but alas it appears that I'll never get to know why.... unless the 1st Circuit Court of Appeals or SCOTUS says so. And believe me, each of those reviewing Courts will have a look at all of this on the merits and on the failure to even notify me of the relationship; I had to dig it out myself when a couple of well-known but nameless Northeast attorneys pulled my coat tail to the issue. Nice.
Posted by Christopher King at 10:08 AM