Kelly Ayotte's McLane, Graf lawyers and Nashua PD in trouble for racial and First Amendment beat downs; ask KingCast not to put it on record in 2010-CV-501.

9:50 a.m. Update -- Why did Judge Landya B. McCafferty recuse herself because of Nancy J. Smith, Esq? Is it because they.... worked together at some point? Why didn't anyone at McLane, Graf or Her Honor notify me of Her Honor's relationship with the firm in my case?
10:50 a.m. Thinking cap on -- Judge McCafferty knows the Ethics Rules rather well as she was NH Disciplinary Counsel. As an aside, of course being an Ethics guru didn't stop Martha Van Oot from lying to Ralph Holder and violating Brown v. Board and Palmore v. Sidoti when they shipped his negro child to an inferior Massachusetts school so he could be with his colored friends.

"After all, she was the state’s first full-time prosecutor for discipline cases in the restructured attorney disciplinary process implemented in 2004."

I know Nancy J. Smith from when I obtained the Bruce McKay dash cam of his brutalization of Liko Kenney. She screwed up the Fred Murray/Maura Murray case and the NH Technical College Pell Grant case as noted herein. But her CV indicates that she is not from NH and they did not attend law school together so it is a logical inference that they were not childhood friends... so that would leave some sort of working relationship....  and what working relationship could be more cozy than the one in which my opposing counsel Jack Middleton was McCafferty's boss and founding partner at McLane, Graf... while Her Honor worked alongside my opposing counsel Jennifer Parent, also at McLane, Graf.
I can't wait to get to SCOTUS behind these facts. Remember folks, I offered to settle the whole damn case if Kelly Ayotte would engage in a quick panel discussion with NENPA on what constitutes a journalist in 2011. But rather than do that, Senator Kelly Ayotte lied to people on Capitol Hill and said I filed frivolous lawsuits against her in her attempt to fund her indefensible actions, so I sued her now for Defamation. My position will be thoroughly vindicated so I'm not taking any shit from anybody on this. 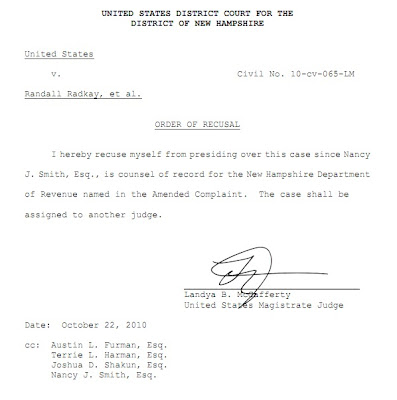 McLane Graf NH Lawyers in hot water for race-based ethical breaches.This is the first Charles Glenn journal entry where you can see that McLane, Graf lawyers sold him down the river and clearly committed an ethical breach IMO by failing to mention that Kelly Ayotte successor Mike Delaney illegal withheld information in a murder case. The information involved the fact that the repeat Perjuror white witness Joseph Salvatore had recently and illegally discharged a gun of the exact same caliber that killed the decedent. Whoa..... Can anyone say "Mike Nifong?" Can't fool me guys, remember I was a trial attorney and that's just.... inexcusable. I look forward to running video at that retrial you bet. 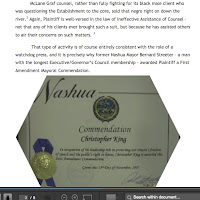 That ethical breach of course dovetails with the complete failure to even notify me that Judge Landya B. McCafferty worked under opposing lead counsel Jack Middleton and with opposing counsel Jennifer Parent. Later that same month McCafferty recused herself when another lawyer signed on to a certain case, so the obvious inference is that it was because of her association with him. Well until that notion is proved incorrect we must assume that McLane, Graf attorneys believe there are two sets of rules in New Hampshire Jurisprudence: One set for the Establishment white lawyers and another set for the black men who challenge that same Establishment.
As to Nashua PD, their white balance is not necessarily the issue, they don't see color as much as they see camera. You could be a Green Martian like my Main Man Marvin as far as they are concerned but as long as you have that camera in their face you will be making those Earthlings Very Angry..... and catch yourself one Galaxial beat down, as noted in this week's Dave Ridley/Mike Gannon/Christopher King-KingCast video from the Nashua Police Station. In the preceding link please also see my reply to Attorney Brian Cullen letting him know I will likely sue for the RSA 91-A production of the home security videos that Nashua PD Unconstitutionally raided/stole from him. And it's an ongoing violation so Mike can still sue in Federal Court to obtain his property back, yessum.
So THAT's why they call me "A Dangerous Black Man." I'll cop to that.
Read this morning's emails on the jump page....

Chris:
As you know, the Court on February 10, 2011, broadly precluded further motions in this case.  Your recent motion to amend appears to be your fifth motion since that prohibition went into effect.  Rather than burdening the court with further objections and your invariable replies, I ask that you indicate your willingness to comply with the order by:
(1)    Withdrawing your Motion to Amend; and
(2)    Assenting to a Motion to Stay all Motion practice and discovery in this matter until the Motions to Dismiss are ruled upon.
Please let me know your position on both requests.
Thanks
brian
Brian J.S. Cullen, Esq.
CullenCollimore pllc
10 East Pearl Street
Nashua, NH 03060
603-881-5500
www.cullencollimore.com
This email may constitute privileged attorney client communication or attorney work product.  If received in error, please notify sender and destroy all copies.

And I might add, as noted in my Reply Memorandum on the McLane, Graf Ineffective Assistance of Counsel issue:
http://www.scribd.com/doc/59857774/McLane-Graf-NH-Lawyers-in-hot-water-for-race-based-ethical-breaches
......these ongoing developments directly pertain to my underlying cases and issues and the Court must have a full and complete record so that things are 100% clear to SCOTUS when we get there.
There are logical and understandable arguments behind my actions, and the severity of the issues, including the McLane shirking of responsibility in representing another black man who questioned the Ayotte and Delaney AG administrations and the Admission of Nashua PD that they basically hate KingCast videos as they beat down Michael Gannon. Have you reviewed the witness statements yet because anyone can see these people are not lying. Come on Brian we both have enough trial experience to know that these witnesses will destroy Nashua PD on the stand. I am sending the FBI complaint in short order.
http://www.youtube.com/watch?v=7Uq60c-FskU
Justice Kagan will no doubt be interested to see us coming.
- Show quoted text -

YouTube - Videos from this email
Your message has been sent.

And lastly, Judicial Economy (not to mention First Amendment issues as a Plaintiff--until I am deemed to have filed frivolous pleadings the Court should not really be placing limitations on my speech and Pleading is speech) militates in favor of the Third Amended Complaint in order to clear all of these issues up on one event. As I say it certainly isn't my fault that Kelly Ayotte, by and through her Chief of Staff, defamed me by lying to the U.S. Senate by stating that someone who holds a law degree actually filed "Frivolous Lawsuits."
In further interests of Judicial Economy you will note that I withdrew the Public Accommodations claim because I did not timely file it, even though we all know that Nashua PD violated said statute.
I'm being a reasonable guy here, meanwhile I get Nashua LE hating on my videos and Kelly Ayotte Staff lying about me while seeking money to defend this Action -- and (still) failing to respond to my simple inquiry on where the Senator stands on CFPA.  It has been a month now, with a phone call and email follow up and the question is straightforward and easy.
http://www.youtube.com/watch?v=rl4tS0W7RcQ
I'm proud of my actions in this case and make no apologies for them. Would that your respective clients could say the same.
- Show quoted text -
And don't get me wrong.... it's not all about racism.
But it is all about oppression.
I'm not down with either of these.
http://christopher-king.blogspot.com/2011/07/mclane-graf-lawyers-and-nashua-pd-in.html
- Show quoted text -
Your message has been sent.

And oh, how could I forget..... we wouldn't be here right now if Senator Ayotte agreed to a 20-30 minute discussion, moderated by NENPA, as to what constitutes a journalist. I gave her and all of you a free out but you are the ones who wanted to play ball.
Well I'm serving a high kicker to your backhand side and coming on in.
- Show quoted text -
Your message has been sent.

What I do warrant to the you and to the Court is that unless Defendants commit yet another incredible act of stupidity evincing unlawful bias, I have concluded my Motion practice.
- Show quoted text -
Posted by Christopher King at 6:50 AM