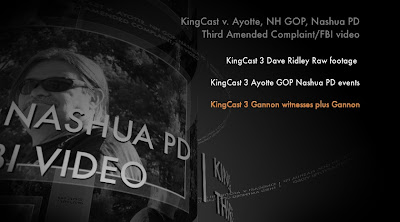 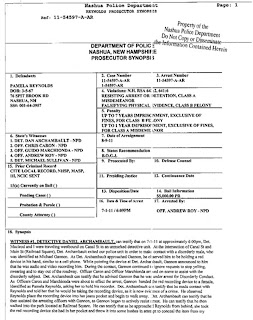 The DVD is $10 all proceeds to benefit the Mike Gannon/Pamela Reynolds Offense Fund. Not Defense, Offense. They are going on the Offense and refuse to be victims of Police Brutality and I concur in full, no dissent.
Reporter Meighan has covered my lawsuit, (direct link) including the fact that Orr & Reno Counsel believe you can't single out online journalists from print media or mainstream journalists (direct link). 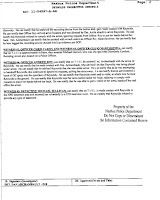 Here is a good background entry with all kinds of video  on KingCast v. Ayotte, NH GOP and Nashua PD, Free Press lawsuit, NH Dist. 2010-CV-501 as all of this relates to ongoing Nashua and GOP/Kelly Ayotte beatdowns of Citizens and Journalists with cameras. So here is the bogus Police Report/Narrative issued against Pamela Reynolds. What's not in the report is the fact that she told the investigating Detective how she was beaten and abused by her baby's daddy years ago, and that the whole incident made her relive it such that she had no comment. That's when he told her "oh well we're dropping the lesser charges and charging you with a felony," as he grinned at her and slammed the door shut.
Well I got news for you pal: You shut one door and another one opens.... the one at the FBI Office, that is. Owing to his minimalist government approach Dave Ridley will not attend with us, but I will tell you this: The harder you push us the harder we will push back, and the facts are on our side even if the scales of New Hampshire Justice.... are not.
And Nashua PD owes Mike Gannon not only the current video as exculpatory evidence, but the 2006 video they stole from his property ab initio. Here is my RSA 91-A warning letter to Attorney Cullen on that matter noting that Courts have overwhelmingly held that LE do not enjoy any expectation of privacy once they leave the confines of the police station, unless of course they are in their squad cars or paddy wagon during a hostage situation, something of that nature would be different and as a former LE Attorney I would say their actions in a hostage situation may be subject to some review as well, but that matter is not before us now, is it. No Sir it is not.
What is before us in Nashua PD history of malfeasance including but not limited to the destruction of evidence, denial of Miranda Rights and impersonation of NH AGs, all of which went unpunished by NH AG cum U.S. Senator Kelly Ayotte. See Michael Paulhus vis a vis Liko Kenny case with forensic analysis, there is a Hollywood movie coming about the Liko Kenney/Bruce McKay/Greg Floyd coverup based on Casey Sherman's Novel "Bad Blood: Freedom and Death in the White Mountains." You guys are living foul in New Hampshire, whether the FBI allows it remains to be seen but the complaint will be lodged on Tuesday, 19 July 2011.

And what do I know about police brutality and cops making people the victims of violent crime? A heck of a lot, actually. I won that issue for my client Michael Isreal in V96-61481, won the criminal trial and settled the Federal Civil Litigation so it's not my first time in the rodeo, folks. Shit, Brother Isreal was so happy he was singing Negro spirituals when I won acquittal for Jerry Doyle on another First Amendment issue in the KingCast short film "American Lawyer." Anyway these people need a good, strong lawyer who actually has the cajones to vigorously sue and in NH that's hard to find. Larry Vogelman was less than diligent IMO because he should have got access for Mr. Gannon to get the 2006 tapes in the first place. Again, you can't bullshit me because I've been there so I most definitely know shit from shineola.
Bound over to the Grand Jury are they, huh? Yah you can indict a ham sandwich these days, ask me how I know this.... because Kelly Ayotte and her idiot LE friend, fired Jaffrey Police Chief Martin Dunn did it to me when I was NAACP Legal Chair fighting police abuse and I embarrassed the both of them but good.
When Civil Rights Lawyer Harold Burbank wrote to Kelly Ayotte about the coverup in the Franconia shootings, citing this journal, she told him with a haughty air of insouciance "You can't believe what you read in blogs, etc. etc... feel free to contact your Senator." Well Senator you can trust what you see in this journal but we can't trust you as far as we can throw you under water so instead we are contacting the FBI and International authorities, how 'bout them apples.
KingCast v. Nashua PD RSA 91A Warning Letter - Mike Gannon 2006 Home Videotapes of LE Misconduct

Good Day Counselors.
We won't stand for this abuse and oppression, and I'll tell you straight up like Strother Martin:
We're going to give it to you this way... because that's the way you want it. The beatings will continue until the morale improves, and this time we've got too many witnesses for you or your clients to be perpetuating lies. Sure most of the local media including your lapdog puppies at WMUR and Union MisLeader will ignore it, but we've got channels above and beyond them.
http://christopher-king.blogspot.com/2011/07/kingcast-dave-ridley-and-mike-gannon.html
http://www.youtube.com/watch?v=1fuDDqU6n4o
Nashua PD really stepped in it this time, and when you compound it with their actions in 2006 you end up with something that resembles more Selma, Alabama circa 1966 than a purportedly "Live Free or Die" State in 2011.
Look on the bright side: More billable hours for some of you.
Think about that over the weekend.
--
Christopher King, J.D.
http://KingCast.net -- Reel News for Real People
http://MortgageMovies.blogspot.com -- Documenting Deceit
617.543.8085/m
617-507-8031/f

Subject: RE: Final RSA 91-A warning + Nashua Cops harass reporter at car crash scene + more lies about Mike Gannon.
Chris:
As you know, on July 11 I responded to your July 10 request for video of the Michael Gannon arrest, observing that the matter is an ongoing investigation and noting that, as you are not licensed in NH and appear to have had you license suspended in Ohio, I do not believe that you are representing Mr. Gannon in a legal capacity here.  A copy of that response is below.  If I have misunderstood the status of your license to practice law please let me know.
The City will review your July 11 request to see if it falls within the same investigatory concern.  It will take 30 days to complete that review.  I will be in touch with you then on this matter.
Brian
Chris:
I have reviewed your July 5, 2011 request pursuant to RSA 91-A for the “unlawfully confiscated porch tapes from the Mike Gannon residence.”  Based on your other correspondence, I assume that you mean to refer to audio/video recorded by Mr. Gannon and obtained by the police in June, 2006.  Please be advised that we cannot produce these tapes to you.  The tapes do not fall within the definition of public records under the statute.  Even were they to be considered as such, they would be exempt from disclosure underLodge v. Knowlton, 118 N.H. 574 (1978), as their release would constitute an unwarranted invasion of privacy of not only Mr. Gannon, who you represent has consented to their release, but the officers recorded on the video, who have not provided you such consent.  In addition, the material recorded concerns an investigation into juvenile criminal investigations, and hence is confidential.  Finally, RSA 570-A:2 prohibits the disclosure of recordings made in violation of the statute.
I have also reviewed your further requests pursuant to RSA 91-A made today for “the July 1, 2011 video shot by Mr. Gannon.”  This video will likewise not be disclosed to you for the reasons set forth above concerning the 2006 video, excepting the juvenile confidentiality.  Moreover, there is a pending investigation and prosecution as to which the referenced video is evidence, and which could be compromised by the release of this evidence to you at this time.  I trust that as you are not licensed in New Hampshire and I believe are suspended in Ohio, you do not actually represent Mr. Gannon in either his criminal defense or in any other capacity, and I am not prosecuting that matter.  Nevertheless, I am confident that Mr. Gannon or his counsel will seek discovery of the video in the context of the criminal case, and leave it to the prosecutor and criminal judge to determine how to address such requests in the course of that action.
Brian
Brian J.S. Cullen, Esq.
CullenCollimore pllc
10 East Pearl Street
Nashua, NH 03060

I'm not sorry that Brian hit the respond all button because I want everyone to see how our government works... it's your tax dollars, folks.
Brian,
1. I take it your client's final answer on the 2006 porch tapes is basically "sue us and we will see what happens."
2. As to the final answer on the 2011 arrest video beloning from Mr. Gannon that is exculpatory evidence:
Whether or not I am licensed to practice law doesn't have squat to do with it. What matters is that if Mr. Gannon decides to review that video he is entitled to do it and he is entitled to have the person of his choice to cut the video for him, which is precisely what I did in the Franconia matter although yes as you recall Kelly conducted her Mickey Mouse sham "investigation" of that in one day the fact still remains that newspapers all over the world gain access to video while there is a case in progress. You and your client will see that fact with brilliant alacrity when I file suit. And lastly, your client's purported concern over the safety and preservation of the video is as Judge Barbadoro would say "entirely without merit." I'm not even going to touch the device, simply record from it with my camera.
3. As to the final answer on the 2011 arrest video beloning from the police station that is exculpatory evidence:
Same item #2, supra. and remember whether or not your client gets away with hiding any of these videos or tapes in the short run, I'm still going to be there in the long run to publish the Truth. Heck if your client is telling the Truth they really won't have any problem releasing the material now, LE does this all the time mate.
See you soon.
- Show quoted text -
Posted by Christopher King at 9:54 AM