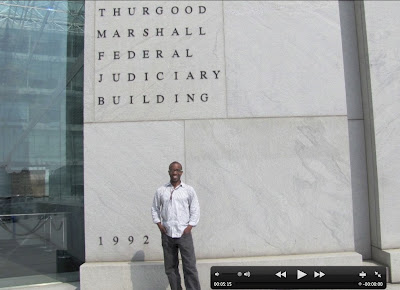 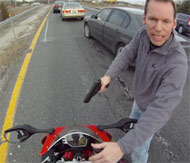 Making a recording of a police traffic stop is not a crime in the opinion of Maryland's attorney general. In a ruling issued last month from the state's top law enforcement office, Chief Counsel Robert N. McDonald found the legal grounds weak for felony wiretapping charges of the type brought against a motorcyclist who posted a video of himself being arrested on YouTube. Maryland State Police had taken advantage of ambiguity in the law to prosecute Anthony Graber, 25 for the April 13 recording.

"No appellate decision in Maryland specifically addresses the application of that law to recording of police activity," McDonald wrote in his opinion.

Graber had been stopped for speeding on Interstate 95. While driving an unmarked car in plain clothes, Maryland State Trooper Joseph David Uhler cut off Graber as he brought his motorcycle to a stop. Uhler then jumped out of his car, gun drawn, commanding, "Get off the motorcycle" before identifying himself. Graber had a camera on his helmet that recorded the entire incident, which he later posted on YouTube (view video). The sight of Uhler wielding his weapon in public over a traffic infraction drew a storm of criticism. Uhler responded by ordering his colleagues to raid Graber's residence and confiscate all of his computer equipment as evidence of wiretapping. By filing charges that could send Graber to prison for sixteen years, the state police wanted to send a clear message to anyone who might consider documenting police misconduct in the future.KingCast Note: The parallels between the Graber and Gannon cases are uncanny. I know the full story and will release specifics of it in Due Course, perhaps after my Emerson Film buddies and I re-enact Mr. Gannon's nightmare.

Under the interpretation of the state police and prosecutors, a police officer has an expectation of privacy while working on public streets. Ordinary citizens on those same streets, however, have no such expectation and are subjected to constant monitoring by the state's red light cameras, speed cameras and recently expanded automated license plate recognition systems. The attorney general's office examined the question of whether the conversation in a traffic stop constituted an "oral conversation" that is "intercepted" under the wiretap act if a citizen records the arrest. After considering a related attorney general ruling from 2000, McDonald ruled that there is no difference between a police officer and a citizen as far as the statute is concerned.

"The reasoning of that excerpt, which suggested that a police officer would not face prosecution or liability under the act for recording an arrest or traffic stop in a public place, would apply equally well to a private person involved in the same incident," McDonald wrote.

Several other states, with the exception of Massachusetts, have developed case law that clearly allows the recording of police traffic stops. The attorney general's ruling did not directly consider the details of the Graber case, but it concluded that the most likely outcome should it come to trial would be acquittal.

"A court could hold that a police stop of an individual necessarily is not a 'private conversation' and therefore does not involve an oral communication covered by the state wiretap act," McDonald ruled. "This conclusion would be consistent with the suggestion made in the 2000 opinion and with the holdings of the courts in most other states construing state eavesdropping statutes. Given the language of the Maryland statutes, this seems the most likely outcome in the case of a detention or arrest."

A copy of the decision is available in a 1.3mb PDF file at the source link below. 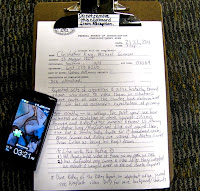 Patrick Meighan's Nashua Telegraph coverage. Slashdot's 2011 coverage.Slashdot 2006 coverage. Carlos Miller website and coverage.KingCast exclusive 2011 video in the FBI links 1 and 2.
As a former State AAG I have simply had enough of the bullshit, and because I am not married and have no children I have ample time to ride my little Triumph around and pursue Justice. Well it's a liter bike (like Anthony Graber's Honda) so it's not so little, but whatever, that's what I will do. And as I told you in Thursday's FBI post -- which is about to be updated with new video after a visit to Nashua PD tomorrow -- I will have no part of any attempted enforcement of arcane "wiretapping" laws that Massachusetts and New Hampshire legislatures cling to with the tenacity of a fly on shit -- which is basically what these laws are, just stinking bullshit. Nashua Town Counselor Brian Cullen has been warned in my RSA 91-A letter and I am just awaiting one final answer from them before the litigation jumps off. I have spoken with Learned Counsel in NH who has prevailed on many criminal cases using the First Amendment as an affirmative defense shield, but my pending lawsuit against Nashua PD for the 2006 and 2011 Mike Gannon videos is the first sword that I know of.
As Bob Dylan told us, "The Times... They Are A' Changin....." Just more slowly in the so-called Progressive Bay and Live Free or Die States, fancy that.
Related: Cop Block Jury Acquittal.
Posted by Christopher King at 3:04 PM