KingCast Mike Gannon Nashua PD RSA 91-A Request for Video of beat down, macing.
You newbies best review FBI Semper Fi Post #1.
Savage Nation producer Eric Steele and I were having a chat about this and other troubling Banking Mortgage Fraud issues (see Mortgage Movies Journal) today.... more on this later. Meanwhile, Mr. Gannon and I even rode our motorcycles in the rain (apologies to Billy Joel) to Nashua PD to deliver our requests. Movie coming tonight. For now read the Semper Fi FBI journal entry from last week and read today's RSA 91-A Demand, above. I didn't read Mr. Gannon's Demand for Discovery but I know he basically hand wrote it, and Demanded access to the video.
At one point in the lobby as you will see, I clarified that he doesn't even need to gain physical access to the video but that I will record it for him. 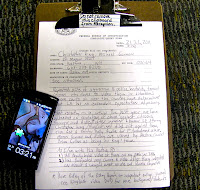 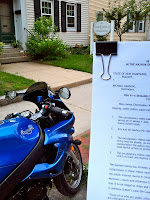 one for Mr. Gannon and the World Public so that they can see I have not altered anything. Simple. Shouldn't be any need for litigation right.... but I bet that there will be litigation, and as a former LE Attorney I will be more than happy to bring it to them. City Attorney Brian Cullen is getting salty with me now that the FBI might investigate, not my fault. Read today's email exchange below the fold. 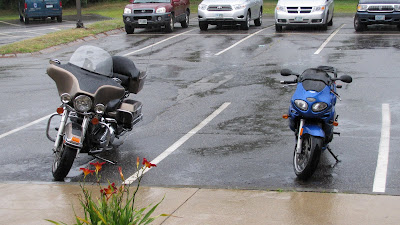 Chris:
I responded to your July 5 and July 10 91-A requests on July 11.  By that same email, I noted that the City required 30 days to determine whether your July 11th request for what you termed at the time the
“kiosk” video would granted or denied. That response complies with RSA 91-A:4.  I would ask that you refrain, therefore, from announcing to your lengthy distribution list (many of which addresses are not even active, I learned from my prior reply all, so presumably are kept by you to give the appearance of a broader circulation than you in fact have) that I am not complying with the statute.  To the extent that you have buried requests in your blogs or other places, I do not read your blogs in depth, so if you have a request to make under the statute please do so by separate and properly identified correspondence.

With respect to the “kiosk” video, I take it that you are referencing video from the Canal Street substation.  I have concluded my review of this request (three weeks early) and have learned that no such video exists.  Therefore none can be produced to you.
I did receive today a copy of yet another 91-A request from you, dated 7/25/11.   I note that the 4 requests repeat aspects of prior requests, and therefor appear to be interposed only to increase the burden to the City rather than for any proper purpose.  As to the non-repetitive aspects of those requests, the City will require 30 days from today to fully review the requests and determine whether the documents you seek exist and whether the request will be granted or denied.  Please note in this regard that to overcome any privacy concerns of the Gannons I will require notarized releases from each.
brian
**********
Let me break it down for you Brian:
1.  Don't get salty with me because the FBI may investigate your abusive client. Pamela Reynolds is about to come down to Boston to file with the FBI as well, and the bar guy at Peddler's Daughter better watch his step lest he wind up getting popped for forgery when your client turns over the 2011 video as required by law. He's trying to make nicey with the boys in blue so he can get a break when his drunken patrons cause problems, don't forget I was resident attorney for a night club Brian I know The Game.
http://christopher-king.blogspot.com/2011/07/kingcast-video-mike-ganon-demands-2011.html
http://www.youtube.com/watch?v=GUIPwgTsvYw
2. I am making my record for litigation, and you should appreciate the fact that I have assembled one distinct cartridge of information that will serve as Attachment A, including all of the substantive analysis from Maryland under almost identical statutes in a very similar situation. There is nothing needlessly duplicative about any of this, and if your client is upset about the amount of money that is being spent I would recommend you advise your client to quit beating and macing people without just cause, and as I stated in the video "Put your f______g guns down and quit threatening civilians."
3. None of my requests are "hidden" anywhere, they are all there plain as day and denoted by headline and bold print and yes your client is indeed tardy with that copy of my 2002/3 complaint. I am being a gentleman about it but do not test my patience or your client will find itself facing a lawsuit for failure to comply with RSA 91-A. I don't know what the holdup is on the request for my own complaint,  which is clearly subject to production, I remember the Ramy case right off the top of my head, I want to say his name is Brian Ramey.
4. I have no need to make my circulation appear broader than it is off of some government emails chain.  I've got more business developing now across the Country than I can deal with already as you are about to find out, and I just got off the air with a large network out of California.  I told you and your client in today's video, the beatings will continue until the morale improves.
5.  The Gannons will be more than happy to add notary to the releases your client already has.
Thank you for your continued attention to these concerns.
Posted by Christopher King at 4:40 PM