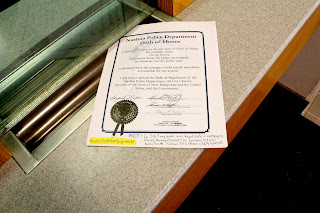 And oh, let me be clear about this:
There are PLENTY of good LE in the Nashua Police Department.
It is Chief Conley's duty to eradicate those who are not.
3 Sept 2011 Update: Dave Ridley Not Guilty filing by the Court is up top.


1 Sept 2011 Update: Nashua Pee Dee nol-prossed the Pam Reynolds felony "case" of tampering with evidence/interference with Police which was a ridiculous charge anyway. Now on to the resisting arrest bullshit.... thing is, while you have no right to resist an unlawful arrest in NH (Live Free or Die anyone?) the problem is that they never told her she was under arrest before she started walking away when they body-slammed her, put knee to her back and maced her.


"They sandbagged [King]," said Defense Counsel Steve Maynard to co-Defendant and citizen videographer Mike Gannon.  "They got the deal in before the Judge got to the bench because they didn't want to be on YouTube."


Yeah they hate the sound of my gat that's for sure, but I love cracking 24fps 1080p video or 5 Hi-Res frames per second of them almost as much as riding a bike or having sex. I totally live for this shit, truth be known it's more fun than lawyering and they know it and they hate the fact that I love it so much. Click-click-click-click.... shoot 'em right upside the fucking head, straight to YouTube LOL. Wait for the misdemeanor trial in December, or Mike Gannon's trial in October, ahem.  I still got some decent stills and video (including the agreement where Mr. Gannon's truck was supposed to be returned to him) but I left my card reader in Boston so I'll be back around noon and start crafting a movie that should air by 4 or 5p depending on whether I treat Bessie to an oil change.
***************
Rut-ro Chief, here's the Union Leader story today and it looks like the Keene Police Chief knows something you should have known a long time ago, or did know but refused to acknowledge:
Keene Police Chief Kenneth J. Meola said the First Circuit ruling would not mean any change for his department, because it is legal in New Hampshire to record police in public places.

And don't let the dog eat the homework on my mortgage fraud forgery wire fraud issues as did your predecessor.... I live for moments like this, telling a hater cop where to get off, as noted in the open letter to NC Attorney Elizabeth Spainhour, who by dint of coincidence, attended Dartmouth for undergrad. So as the author of this summer's NC Bar Association feature on 3rd Circuit Decisions, she also knows the lay of the land here in NH, and she knows who is getting screwed:

The taxpayers, because through increased insurance premiums they will be paying to cover the civil litigation that follows now for Dave Ridley now that he kicked Nashua's ass, and for Mike Gannon and Pamela Reynolds too if your prosecutors keep on with this nonsense. You can't destroy evidence that isn't police evidence in the first place when the purported evidence is the lawfully-taken video in the first place, DUH.

You may detect a bit of snarl in my voice, Chief.... well that is because you and your lawyers have been so goddamn obdurate in your position that I am more than happy to bring you and them a major comeuppance. I'll be at Ms. Reynolds' hearing tomorrow as I was at her first hearing with a couple of Canons blazing, 720p and 1080p, same for Mike Gannon when his time comes. And I will likely file suit next week for the 2006 and 2011 Gannon videos, as the home video shows Nashua LE illegally entering his home and putting a loaded shotgun to his chin, which he promptly removed in reflexive action learned as a U.S. Military Veteran.... where he could have died defending the freedoms of this Country that you so freely shit on every chance you get. And Ms. Reynolds' daughter is an enlisted serviceman as well, exactly WTF kind of message do you think you're sending to people like her who could go out and get fucking killed fighting for these freedoms. I can't wait to squeeze a trigger on my Canons against any and all of that shit you put people through. An Uzi typically rips 10rps; my 60D only rips 5.3 but the beauty of it is that I get to stay out of prison while I fill haters chock full of digital lead.

Newbies watch Ms. Reynolds and Yours Truly file our complaints to the FBI above, and the summation video with witness interviews is here. The open letter reads below the fold. I have simply had enough of Nashua PD's bullshit, and I call it as I see it, because that is exactly what it is: Complete and utter bullshit and you know it.

I just read your great summation on 3rd Circuit law:

I see you are no stranger to the NH experience nor am I a stranger to the southern...
my folks are from TN and I lived in Chesapeake/Va Beach 10 years ago doing wireless zoning between Va. Beach and Richmond corridor.

Crazy stuff over at your alma mater yesterday,
http://christopher-king.blogspot.com/2011/08/kingcast-says-crack-down-on-illegal.html

......and crazy stuff in general with former NH AG Kelly Ayotte telling mad lies and covering up the real facts behind the Franconia double homicide in 2007. Trust me on this I have the whole state file and the investigative file from a private attorney, ugly stuff and the subject of an upcoming movie:

Anyway take a look at how NH has been approaching First Amendment battles with cameras and the police. They won't arrest me because they know damn well I've successfully sued and defendant clients on these battles but they will arrest others, even though they get their fannies spanked as the local Judge and 1st Circuit are holding.....

You got some good Nashua LE but they are forced to walk the thin blue line, we went to the FBI on these people because of treatment like this:

But meanwhile I have to force Nashua PD to investigate the forgery of my sig to a mortgage. Take a look:

Keene Police Chief Kenneth J. Meola said the First Circuit ruling would not mean any change for his department, because it is legal in New Hampshire to record police in public places.

What do we have to grab Nashua PD by the scruff of the neck and beat them about the head and thorax until they get the picture? It looks like Keene already knows what Chief Conley.... doesn't.
Posted by Christopher King at 10:07 AM