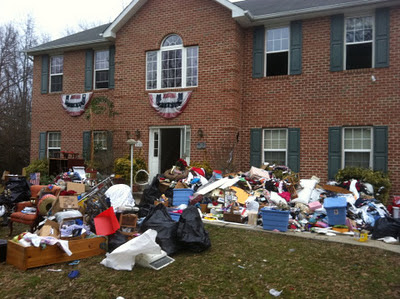 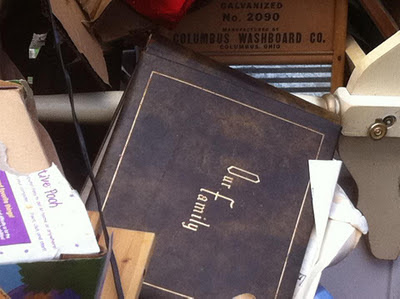 Gentlemen: That is what remains of the Cardoni family's possessions after a wrongful foreclosure in Maryland, same state where the unlawful foreclosure of Anderson v. Burson is ongoing as noted below. I am going to be obtaining the documents from them but for now I can tell you that the White House has invited them to file a complaint and there is at least one other active investigation going with regard to the purported lenders/servicers in their particular case... and I believe that known scofflaw Thomas P. Dore is involved...
Be that as it may, I read with great interest this weekends' New York Times feature story and I look forward to watching your work in the coming years. Here are several cases that merit your immediate investigation. I discuss my background as former Assistant AG (with Kent Markus and Richard Cordray) and Title Insurance Producer in this video and journal entry, which addresses the BoA $335M racism settlement vis a vis the racial steering in Chapter 13/7 Bankruptcy proceedings. Thank you in advance for your Due Diligence; I may be reached at kingjurisdoctor@gmail.com or 617.543.8085m.


The group, known as the Residential Mortgage-Backed Securities Working Group, is part of the Financial Fraud Enforcement Task Force, an interagency outfit created by Mr. Obama in 2009 to prosecute financial crimes.
Despite three years of work by that task force, however, public sentiment still holds that few if any of the real perpetrators of the housing bubble and financial crisis have been held accountable.
Smalley v. Shapiro & Burson -- Court ignored long-established law that Fraud vitiates everything to hold that homeowners who subsequently learn of robo-signing cannot raise the issue after they have lost their cases.


Anderson v. Burson -- Maryland Court of Appeals, up for Reconsideration as Saxon and two different Deustschebank entities lied about the chain of title relative to the note: 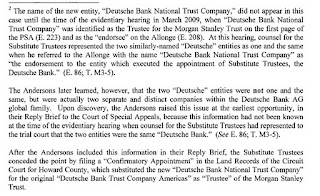 KingCast:Mortgage Movies Hosts Anderson v. Burson Motion for Reconsideration in Maryland Court of Appeals
Phelan Hallinan & Schmeig v. George Hendricks -- Unlawful police calls against homeowner, Senator Robert Menendez and nine (9) other U.S. Senators issue requests for information from Mortgage Industry , I sent a FOIA Request and anticipate a response shortly.
Anchor Bank & Union Federal v. R.P. -- Wisconsin Judge Colas allows receivership twice without any showing of standing to foreclose ab initio. They even put a single mother out in the street after tricking her to paying them the rent money.
Fein, Such & Kahn and robo-signer Bethany Hood busted on phone and in an office visit: New Jersey validated the illegal conduct of Fein, Such & Kahn and Lender Processing Services.

Wells Fargo v. Jeanne Ingress -- False promise by Attorney that he had the original note and mortgage in his desk. NH Judge Diane Nicolosi enters Judgment against Ingress even though there are actually robo-signer Linda Green documents involved.
Marie Miller v. NationStar -- Case dismissed then reinstated, calls for Impeachment of Judge who ignored prior Court Order that NationStar produce the Original Mortgage.

The tone for New Hampshire malfeasance was set by none other than Republican Senator Kelly Ayotte when she was New Hampshire Attorney General. To this day she refuses to investigate the forgery of my name to a mortgage when I was a licensed title insurance producer and she was found negligent in the largest consumer fraud in NH history, the FRM Ponzi scam.
Posted by Christopher King at 4:19 PM