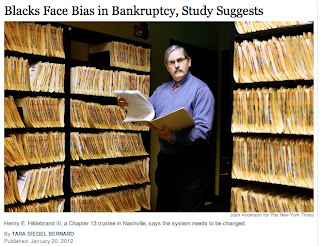 
The study has two parts. One used data from actual bankruptcy cases from the Consumer Bankruptcy Project, the most detailed trove of information on filers currently available. The project surveyed 2,400 households nationwide who filed for bankruptcy in 2007.
Results from the second part of the study, which illustrated the lawyer’s influence in determining which bankruptcy chapter to choose, came from a survey sent to lawyers asking them questions based on fictitious couples who were seeking bankruptcy protection. When the couple was named “Reggie and Latisha,” who attended an African Methodist Episcopal Church — as opposed to a white couple, “Todd and Allison,” who were members of a United Methodist Church — the lawyers were more likely to recommend a Chapter 13, even though the two couples’ financial circumstances were identical.
Sadly, there's nothing new here. Racial discrimination in housing was going on since the Warsaw Ghettos in the Old World and on into the hills of Cleveland Heights where we were one of exactly three (3) black families for miles and miles back in 1970. That was related to the landmark case of Heights Community Congress v. Hilltop Realty 774 F.2d 135 (1985), as noted in $335M Bank of America racial settlement journal entry. Bank of America are scum, and Citibank is scum too, that's why POTUS sued them as noted in the previous link. Anyway I discuss related matters with Rod Class at one of his seminars in the short video at top as we discuss how to empower people of all racial, religious or ethnic backgrounds against these morally aberrant and fiscally dishonest banksters.
Posted by Christopher King at 7:40 AM