KingCast sees Wisconsin Judge Juan B. Colas reappear, this time he does the right thing for the First Amendment in voiding Scott Walker's labor laws... earlier he allowed a fraudulent foreclosure to proceed without proof of Standing.


Note: For good measure I threw in the Recall Scott Walker video showing how his office ran a man right out of town when he came to question his foreclosure. They didn't want to talk to him at all, and kept trying to separate us, an act that dovetails with Walker's attempts to ban cameras in the Statehouse. As you can see, I'm not having any of that nonsense, he is a public servant, I am a reporter with experience as a closing attorney/title insurance producer and the Truth will be told, right here at Mortgage Movies Journal.

He's baaaack.... and thank god he actually protected the First Amendment in Wisconsin's raging union battle in a crushing blow to the Republicans who are now trumpeting big bank puppets like Senator Kelly Ayotte. Here is the actual Opinion, and here is the dirt on Juan B. Colas and Anchor Bank, who got receivership without ever demonstrating a showing of Standing requisite to any legal foreclosure case, as determined in Wisconsin Appellate Court in Aurora v. Carlsen, followed by Aurora v. Weisbaum, below the fold.


Although Aurora's vice president averred in conclusory fashion that Aurora became holder of the mortgage which is the subject of the action "by delivery without a written assignment," the affiant failed to give any factual de-tail of a physical delivery of both the consoli-dated note and the CEMA to Aurora prior to the commencement of the action. Thus, Aurora failed to establish its standing to commence the action. 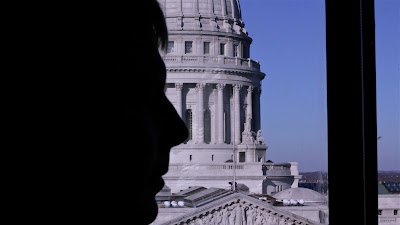 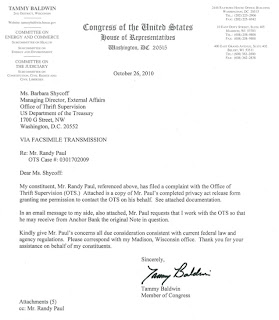 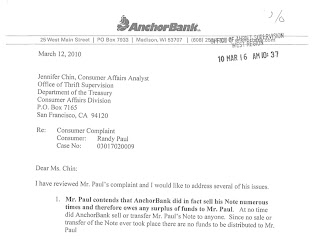 Sooooo.... if you haven't sold off the note can I see it?


I'll come back to your office tomorrow, okay?
Query, what if someone starts putting up certified checks and demanding that banks like Anchor Bank produce the original Note and Mortgage or start paying liquidated damages for the lost profits owed to the unwitting mortgagor, who basically signed what is best recognized as an adhesion contract?
***************
There was a complete no-show on the hearing scheduled today but no one told the Counter-Plaintiff. The Bailiff/Clerk or Session 8 told us on video that they tried to reach him but that's completely unbelievable because his name and full contact information is of course on file with the Court. He alleges that the same thing happened when Anchor Bank was granted receivership, now I believe him given what I witnessed today. Frankly the U.S. Justice Department should step in because this is ridiculous. I had a brief chat with Judge Colas and another chat Anchor Bank President and COO Mark Timmerman pictured, above (not certain if he still holds that position, see the graph at bottom) at the Executive Office of Anchor Bank. As I walked in with the mighty Canon 60D cranking I saw that my Notice of Media Coverage was the top document on their counter. Watch the video.

Here is your back story on how Anchor Bank and Union Federal have basically stolen money from Mr. R.P. with the express and tacit approval of Dane County Circuit Court Judge Juan B. Colas, pictured at top. My question to him, and to the folks in the executive office at Anchor Bank is simple:

How in the hell can you order or allow receivership when there is no finding of Standing to initiate a foreclosure proceeding ab initio? This is a de facto and de jure violation of basic procedural and substantive due process rights but the Courts, the Attorney Generals and most major media are so beholden to the banksters that they talk a mean game then do absolutely nothing. As to the letters written to the Office of Thrift by the Honorable Tammy Baldwin on a prior foreclosure, more on that later. I have a lot to digest this evening, first of which will be a pan-seared dijon salmon platter. The pesto Tilapia with pine nuts and asparagus this afternoon was a definite winner, let's see if my Foodie Spidey Senses ring true again. And oh, my Spidey senses also tell me something is amiss here with Anchor Bank because how could they stay on the skids for so long at $.42 without being delisted, like Fannie Mae and Freddie Mac. Fascinating.

Accord Aurora v. Weisbaum, 2011 NY Slip Op 4184; 2011 N.Y. App. Div. LEXIS 4108 (May 17, 2011) P12 In sum, Aurora failed to authenticate Exhibit D, the document purporting to be an assignment of the note. Thus, regardless of other alleged proof problems relating to that note and the Carlsens' alleged [*9] default, the circuit court's finding that Aurora was the holder of the note is clearly erroneous--no ad-missible evidence supports that finding. Aurora failed to prove its case, and it was not entitled to a judgment of foreclosure.
By the Court.--Judgment reversed.

....and Aurora v. Carlsen, 2011 WI App 58; 2011 Wisc. App. LEXIS 235 (March 24, 2011).
Moreover, Aurora produced no documents indicating an assignment to it of the second note and mortgage
or of the entire consolidated note and CEMA in the amount of $704,000. Although Aurora's vice president averred in conclusory fashion that Aurora became holder of the mortgage which is the subject of the ac-tion "by delivery without a written assign-ment," the affiant failed to give any factual de-tail of a physical delivery of both the consoli-dated note and the CEMA to Aurora prior to the commencement of the action. Thus, Aurora failed to establish its standing to commence the action.
DILLON, J.P., BELEN and ROMAN, JJ., concur

ORDERED that the appeal from the order dated February 25, 2010, is dismissed, as that order was superseded by the order dated May 19, 2010, made upon renewal; and it is further,

ORDERED that the order dated May 19, 2010, is reversed insofar as appealed from, on the law, and, upon renewal, the order dated February 25, 2010, is vacated, the plaintiff's motions for summary judgment on the complaint and for an order of reference are denied, and the cross motion of the defendants Steven Weisblum and Patti Weisblum for summary judgment dismissing the complaint insofar as asserted against them is granted; and it is further,

ORDERED that one bill of costs is awarded to the defendants Steven Weisblum and Patti Weisblum.

Posted by Christopher King at 3:49 AM